1 BMW 1000 RR Takes On a Suzuki Hayabusa and Kawasaki Ninja, Corvette Is a Piece of Cake

Pricing for the 2023 Polestar 2 Announced, Will Take More Than a Clever Campaign

Suzuki Hayabusa Turns Into a Great Beginner Bike, Is Only Good for Laughs and Giggles

"The Suzuki Hayabusa is a great beginner's bike." You'll often see this phrase posted on certain forums or groups, as a response to newcomers asking for advice on what motorcycle they should buy. The automotive equivalent of this is "Sure, an 800-hp, RWD, Toyota Supra with no driving aids is perfect for a beginner driver, especially in the wet!". So don't always believe what you read on the Internet.
9 photos

When you're starting as a motorcycle rider, the last thing you need is to get scared to death at the first twist of the wrist. To get accustomed to commuting on two wheels, you need to build up confidence, skills, and a sense of anticipation.

If you are already used to being in traffic after driving cars, that will help when you're switching to bikes. But the way a bike accelerates, brakes, and corners – that's a completely different story.

Even if you're starting on a small, 125 cc motorcycle, chances are that you'll still be impressed by how fast it can hit 60 mph (96 kph). And after that, you might get scared under heavy braking, especially if you're dealing with lower grip levels.

So the point of this is that you should never, ever consider buying a Suzuki Hayabusa as your first motorcycle. If this piece of advice seems to be in contradiction with the title of this story, bear with us a little while longer.

People will do anything for Internet fame these days. We've seen some crazy builds over the last decade, and it's getting to a point where few things can still surprise you. Different people come up with different ideas, and the variety of custom cars and bikes these days is impressive, to say the least.

People are already used to seeing turbo Hayabusas and motorcycles with engines that came off cars, such as the Viper-powered Millyard. So how can you a find way to still surprise people after all of that?

What goes up must come down, so it seems that one particular Youtuber, that goes by the name of Vasily Builds has decided to do things differently. About two months ago, he went out and bought the cheapest Suzuki Hayabusa he could find.

Paying a little over $2,000 for a bike with a seemingly-totaled engine might seem crazy for most people. But he had a plan all along. The 1,300 cc Hayabusa engine will be used to build a Jet Boat, a project which is already in the works. And a turbocharger will be added to the equation for a bit of extra oomph.

So, left with a rolling chassis, Vasily decided to start a different project altogether. By swapping in a 212 cc lawnmower engine and shaving approximately 100 lbs (45 kg) of unwanted weight, you could say that this Hayabusa is now a great beginner bike.

On its first run, it recorded a top speed of 56 mph (90 kph). That's great for cruising around without getting into trouble, and you can imagine the range you'll get with such a big fuel tank. With no more manual shifting required, this once legendary bike is now more of a scooter. At least the jet boat should prove to be more exciting. 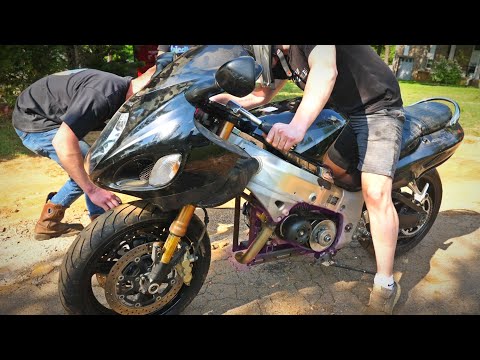