5 Supercharged Lamborghini Huracan Performante Flies On the Road, Sounds Beastly
Up Next

Cristian Gnaticov
Not all supercharged cars are whinners, no matter how much power they have on tap, and even with such an upgrade beneath the skin, the Lamborghini Huracan still sounds like a full-blown exotic under heavy accelerations.
6 photos

On top of that, it goes like a bat out of hell, being much quicker than the stock Huracan Performante, on which the example put to the test on a no-speed-limit section of the German Autobahn on video down below builds.

According to the uploader, the Italian supercar in question has had its internals modified by VF Engineering. The U.S. tuner has given it a supercharger, as we already mentioned in the intro, bumping the output and torque to 851 ps (839 hp / 626 kW) and 770 Nm (568 lb-ft).

Now, we don’t actually know how quick the example tuned by VF Engineering and depicted on film at the bottom of this story is, but we reckon that it must have dropped at least one tenth of a second from the 0-100 kph (0-62 mph) sprint. Since increasing the top speed would have required additional work, we wouldn’t be surprised if it still maxes out at a little over 325 kph (201 mph), just like the standard Huracan Performante.

But enough babbling about it, as you’re likely here to see it in action rather than read about it for the umpteenth time, so without further ado, you know the drill. 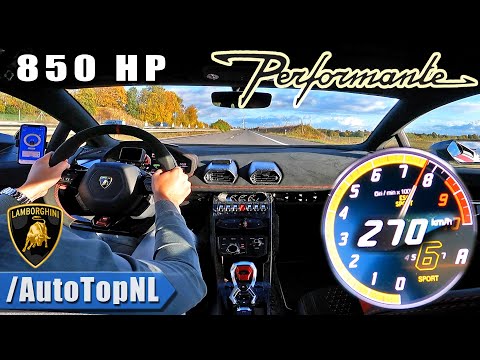