1 Honda Civics Line Up for a Race, Turbo K20 Meets Boosted B18

Supercharged Honda 2000 Does Not Whine, Sounds Heavenly, Is Way Faster

Sebastian Toma
Honda's S2000 din not have a successor, but it had a predecessor, the S600. Both models have their body style and high-revving engines in common, and the S2000 is still a reference on the latter even today, 12 years after the last one was made.
6 photos

The Honda S000 AP1 in JDM spec had the highest specific output per liter for any production car with a piston engine at the time of launch. The record stood even after it stopped being manufactured, as the 124 metric horsepower per liter was value was only topped by Ferrari's 458 Italia, many years later.

Eventually, other production vehicles managed to beat the Honda S2000 AP1 in JDM form at this chapter, but all models that did so were supercars, or significantly more expensive sports cars than the S2000 ever was.

Mind you, either Honda S2000 version has over 110 horsepower per liter, so it stacks up nicely against anything you compare it with, especially from its era. Sadly, Honda only made 110,673 of them for the entire world, which means that there were a lot of them at one point, but they are becoming rare by the day.

Since the S2000 had such impressive specifications for its day, people tend to overlook its minor issues, such as the fact that the set of stalks behind the steering wheel are a bit too close for comfort, and they often get touched by accident. The driving post is also cramped, but that comes with the territory.

Now, even though the S2000 had plenty of power in its day, and offers a value that is respectable even today, eventually, an owner will get used to it, and will want more. It's just human nature, and that is how are brains are wired to work.

Well, in the case of a high-strung, naturally aspirated, and high-revving unit, adding a sports air filter, an aftermarket exhaust, and stopping for the day might not be enough.

Instead, some owners have turned to supercharger kits. As a result, the example in the video below gets a almost twice its stock power, with 420 horsepower claimed.

The latter should be at the crank, as well as measured in metric units, but we digress, this supercharged S2000 has over four hundred horsepower, and it is more than enough to make it ridiculously quick at sprinting from 62 to 124 mph (100-200 kph), as well as beyond the latter. This is how one behaves with a big turbo.

Even more impressive is the fact that all this power comes in a roadster that is known for its sporty handling, and the supercharger could not have taken from that part in any way.

With modern performance tires, which are better than their equivalents from 12 years ago, this modified example is significantly faster than its siblings were at the time of their debut. 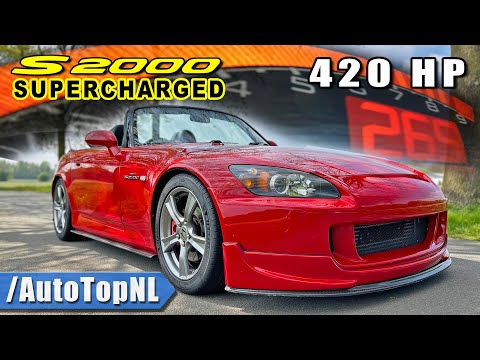