2 Urraco Turned 50 This Autumn, a Lamborghini That Shouldn't Be Forgotten

3 Conor McGregor Treats Himself to a $3.5 Million Lamborghini Tecnomar 63 Yacht

5 Widebody Lamborghini Sian Concept Is Pure Carbon, Beats the Original
Up Next

Supercar Blondie Checks Out the Lamborghini Sian, Fires Up the Hybrid V12

Mihnea Radu
Lamborghini brought over not one but two extreme cars for YouTuber Supercar Blondie to check out. Last week, they let her do a walkaround of the Vision GT, which we mentioned looked like a single-seater version of this bad boy. Yes, we're talking about the one and only Sian FKP 37, the first hybrid supercar in Lamborghini history... if you exclude a few concepts.
5 photos

But anyway, the Sian is a very exciting car to do videos on. It's that latest unobtainable exotic that supercar fans will drool over, partly because of the way it looks, which is probably a preview for the next generation of Lambos.

The Y motif can be seen in many of the creases, the wheels, and especially the lights. The satin green paint is also very unusual for a supercar, and everything which looks black from a distance is actually glossy carbon fiber. We especially liked the louver elements over the front fenders and the vertical fins at the back. It would probably look very interesting in pearl white.

While not groundbreaking from a performance point of view, the engine in the Sian is still special. We're dealing with a combination between the naturally aspirated 6.5-liter from the SVJ and a 34 horsepower mild-hybrid electric motor system, delivering a combined 807 horsepower (818 PS). So you still get that raw V12 sound, but with a modern twist.

The supercar's full name is "Sian FKP 37" and that's because it's a tribute to Ferdinand Piëch, who's the late former chairman of the VW Group. He's the one who brought Lambo into the German fold and was behind the push for many of those super-ambitious projects. As with most Italian exotics, the production numbers are very low. Just 63 coupes are scheduled to be made (plus 19 roadsters), this being unit 00. Unless we're mistaken, it's the example they showed in September 2019 in Frankfurt, which is probably the last major motor show Lamborghini ever attended. 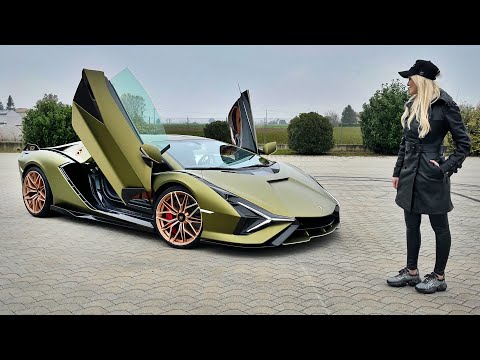