5 Tesla Model 3 Configurator Looks Like The Real Deal, But It Isn’t
Up Next

Vlad Mitrache
Let's be honest, the Summon feature that Tesla vehicles have is one of those gizmos that's pretty much useless for 99 percent of the time, and then more than makes up for it on that one occasion when it saves your Jimmy Choo shoes from having to step into a big puddle.
1 photo
So it's a nice feature to have - or rather to know you have. It's also cool for showing off, which we can only assume accounts for over 90 percent of the cases it is used in. We wouldn't be surprised if people parked in tight spaces on purpose, just to have an excuse. Of course, they'll say they did out of the kindness of their heart, so a car without Summon capabilities would get to use the uncramped parking bays.

However, contrary to what a lot of Tesla fans might think, the EVs aren't the only vehicles out there capable of moving on their own over very short distances with no driver on board. BMW has it, Mercedes-Benz too, while Land Rover presented a similar feature that allowed users to remotely control the steering as well, even though that was just on a prototype.

But just because they drive cars from other brands, it doesn't mean their owners use this feature any differently. We can't tell if that's the case with this man (named Tristan Carneiro from New Jersey) and his Model X - for what we know, he could be storing all kinds of crap in that garage so there was no room left for the door to open.

Whatever the case, you can see him sitting there, hands in his pockets, as his black Model X reverses into the garage. After it parked, Tristan told the car to inch forward a bit, so it would leave enough clearance to the back wall. He sat in front of the car to make sure it didn't move further than it was supposed to.

At the same time, though, the Homelink system started closing the garage door, so Tristan figures his job was done and heads toward the house. That's when the Model X resumes moving forward with its sensors failing to pick up the closing door.

Tristan says he needed to act quickly and give the door the signal to open, or the damage to the car - and possibly the garage door as well - would have been more severe. As it is, the Model X's hood has some nasty scratches, and who knows what happened to the hasty door? I guess we can all tell which was more important to Tristan. 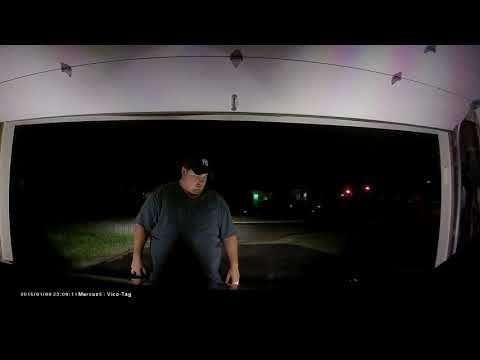