1 Porsche Design to Auction Off Its Celebratory Porsche 911 S 2.4 Targa

2 Low-Mileage 1998 Yamaha YZF-R1 Is the Stuff of Legend, Wants a Serious Relationship

4 1967 Ford Mustang Is So Pink It'll Give You Chores, Ask You When You're Going to Marry It

Lexus LC 500 Has Lots of Aplomb, Is Not Afraid to Admit That It Has a Thing for Wheels

Subtly-Modded 2001 Ducati 748 Isn’t Quite Perfect, But You’ll Dig It Nonetheless

This charming 748 is in excellent shape overall, and it sounds just as good as it looks!
26 photos

Back when this 2001 Ducati 748 was in the previous owner’s possession, it received a myriad of high-grade aftermarket components. For starters, you’ll find carbon fiber slip-on exhaust mufflers from Fast by Ferracci, and they’re appropriately complemented by an ECU tuning chip. Right below these silencers, there’s an inconspicuous license plate relocation kit that keeps the rear end free of clutter.

Pazzo Racing control levers have been mounted on the bike’s handlebars, while its standard front fender was swapped with a CFRP alternative. The clutch – which is now encased in an open Ducati Performance cover – gets actuated via a premium Yoyodyne slave cylinder. Bologna’s head-turner marches on freshly-installed Pirelli tires, and its Desmoquattro powerplant features new timing belts installed within the last couple of months.

Boasting 11.5:1 compression, a Marelli EFI, and eight valves driven by dual cams, this liquid-cooled 748cc L-twin is good for up to 98 hp at 11,000 rpm. On the other hand, a respectable torque output of 55 pound-feet (75 Nm) will be summoned at about 9,000 whirls per minute. To reach the rear three-spoke wheel, the engine’s oomph flows through a dry clutch and a six-speed gearbox.

As you're reading these paragraphs, Ducati’s head-turner is making its way to the auction block on Bring a Trailer. It will remain listed at no reserve for another five days (until July 28), so you’ll want to act sooner rather than later if you want it in your garage. A mere six grand would be enough to make you the top bidder, but we honestly doubt this will be the case for much longer. 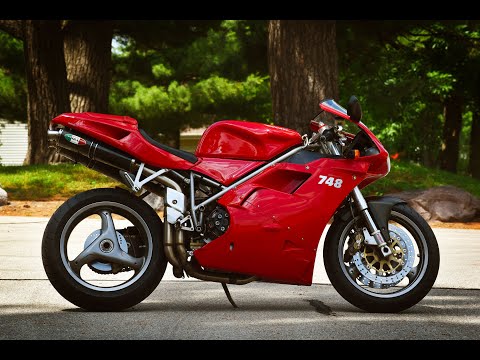