While everyone around the world knows and loves Ford’s Mustang best, Blue Oval’s local motorsport hero during the late 1960s and first half of the 1970s was the Torino. And the classic muscle car didn’t disappoint.
28 photos

Produced only between 1968 and 1976, Ford’s Torino nameplate had a concise career. It managed to gain widespread NASCAR recognition for a successful racing legacy, and also came with true high-performance muscle car options. The latter would be owed to the iconic 428- and 429ci Cobra Jet engines.

But not everyone wanted the big block to go along with the high-end trim recognition. So, during the third-generation reshuffling of the grade system, Ford revamped the series with Torino, Gran Torino, and Gran Torino Sport models. And while the larger 400ci and 429ci engines were still available, the Gran Torino Sport could also be fitted with a more sensible 351ci of the Windsor or Cleveland variety.

This “5A” Light Pewter Metallic example mixed the subtle exterior appearance with one of the 351ci mills and the 1973 Ford Gran Torino Sport was probably treasured by each one of its previous owners. Otherwise, it would not have arrived looking pristine (sure, the repaint might have helped as well) in the inventory of Sherman, Texas-based dealership PC Classic Cars, and with such low mileage.

The odometer counts less than 41k miles (almost 66,000 km) and they’re all of the great “original” variety. And that’s not the sole highlight for this two-door hardtop unit. We could also mention the sleek black vinyl top, the 14-inch Magnum 500 wheels, or the factory black interior. And there’s more, because under the hood lies a numbers-matching 351ci V8 engine (they hint it’s a Cleveland mill) that’s paired to an FMX three-speed automatic transmission, and a nine-inch rear end with factory 2:75 gears.

Among the creature comforts, we could only mention the powered steering and disc brakes, but the asking price is also not going to break the bank: PC Classic Cars wants exactly $22,500. 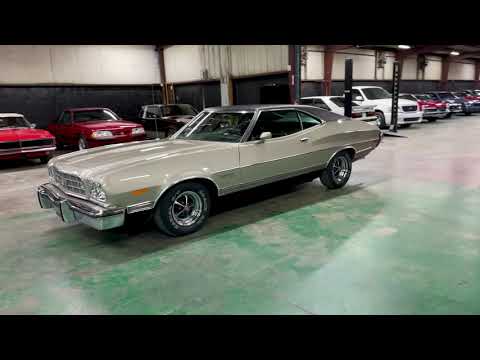