4 Ken Block Hands Over the Reins to Travis Pastrana for Gymkhana 11, We Get a Peek

5 Subaru Impreza and XV Getting Turbocharged 1.5-Liter from 2021?
Up Next

Mihnea Radu
While the Evo left many years ago, Subaru's WRX STI continues to soldier on, attracting people who love to spend money on big wheels, coilovers, and body kits. A new one is just around the corner, but we're not quite ready to say goodbye to the current model, not until it reaches its full potential.
26 photos

The current model is known within the community as the Evo Eye due to the shame of its headlights and it's been around since 2015. In that time, we've seen a lot of amazing body kits, paint jobs, and turbo setups. But some things make more sense in the digital world, especially a widebody conversion like this one.

Rendering artist Hycade has made it his mission to improve every current cult car drastically, and he's just landed on the WRX STI. His vision for a widebody conversion is so much better than anything else that's out there that we hope somebody will buy his design and produce some actual fender flares.

At the front, the new bumper and fenders work together to add many inches of muscle mass. The lower air intakes have been re-shaped around a chin spoiler with F1-like sections, while the hood sports the hood scoop of Subaru wet dreams.

Meanwhile, the rear is a little less plausible, as the fender flares also cover the doors. It's a constant problem with widebody kits on compact 4-door cars. But we absolutely love how the shoulders rise to form that gigantic wing. While the quad titanium exhaust tips and carbon diffuser are a bit much, nobody who buys this car wants to be subtle.

STI stands for Subaru Technica International, a division of the Japanese automaker which specializes in making things go fast. An STI badge means you have a sports car, not a regular compact. And if you don't believe this, consider the fact that most buyers spend about $40,000 on a new one. 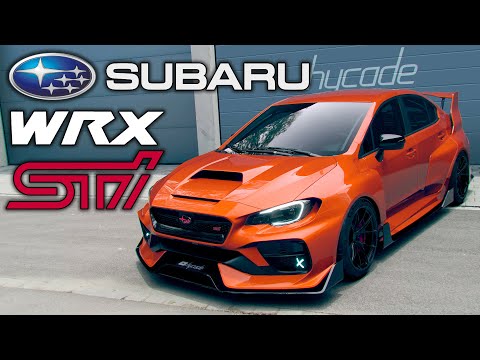