4 Lamborghini Gallardo LP560-4 Gets Turned into Police Cruiser
Car video reviews:
Up Next 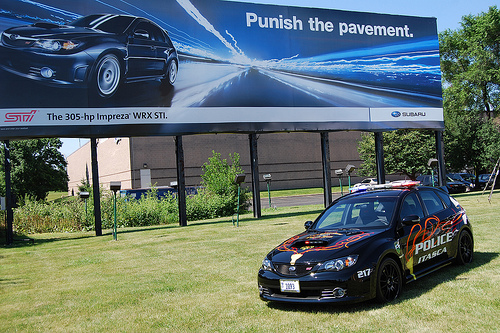 In a move that probably mimics the police car Lamborghini donated to the State Police in Italy, Subaru America is looking to roughen up a bit the image of the Impreza WRX. They decided to turn it into a cop car, roaming the streets looking for baddies.

The car was unveiled during the Memorial Day Parade and it was a gift to the Itasca Village Police Department. The car was a gift from Subaru America and it came at no charge to the Police Force. Subaru was also kind enough to add its own rendition of what a police cruiser should look like and laid out the graphics and added the gadgets themselves. All the officers had to do was to turn the key and drive away.

Seeing as how the Impreza has a strong rally heritage, you can bet that this police cruiser version has a lot of horsepower tucked away under the hood – some 305 hp. This vehicle is going to be used for promotional purposes so it's unlikely that if you're breaking the law in Illinois you're gonna see this car in your rearview mirror lights blazing and sirens yelling.

The Itasca police chief, Scott Heher declared: “Subaru's commitment toward furthering police community partnerships and being a valued corporate citizen have been remarkable”. On the other side of this deal, Subaru vice president and chief marketing officer Tim Mahoney had this to say: “We care about the safety of our customers and applaud the Itasca Police Department on their initiative to promote safe driving. For Subaru to be able to participate in that quest is a pleasure”.

The only bad news here seems to be the inadvertence between the police department press release and Subaru's press release. In the PD announcement, they thank Subaru for the free ride (literally), while Subaru claims the car is just a “loan“. We think somebody down at the precinct is going to get a nasty surprise when they come and take this baby away in a tow truck later this week.