3 Despite Having Thin Paint, 964 Porsche 911 Turbo Goes Through Full Detailing

5 1971 Ford Mustang Boss 351 That Spent 46 Years in a Barn Is a Rat-Infested Survivor
Car video reviews:
Up Next

The Fiat 126 is a little Italian city car that's worn more masks than the average Broadway running of Phantom of the Opera. But let's be real, the most historically significant and interesting variations almost always come out of Eastern European nations like Poland.

In a country where learning to make do with less is an art form, this Subaru boxer engine swapped Polski Fiat 126p has more character than just about anything else on four wheels from the German border to all the way to the Ukrainian one. As for what model year this distinguished relic of a bygone Eastern Europe comes from, the brains behind this project, JDM Serwis of Wisla, Poland, claims it left the factory back in the 1990s.

But it's not like you can tell from just a passing glance. Between 1973 and the year 2000, this Polish-made rear-engined economy car on an antiquated Italian platform seldom changed much at all. However, the engine did increase in size from 594cc to 652cc, and then 702cc.

For some context, 702cc is equal to around 43 cubic inches, or a touch over one-tenth of a 427 Chevy Big Block. Not that any of this matters anymore, as it's all been removed from the car and presumably sits in a Polish landfill to this very day.

Everything from the engine to the transmission and even the brakes and suspension was removed until all that remained was a superlight bare shell. Now, to be able to give you the rundown of everything that goes into the new guts in this Polski Fiat requires a fair amount of translating from Polish to English.

But, we have reason to think we've covered just about everything, so here it goes. It all starts with a strong foundation, a long block variant of the same Subaru EJ22 flat-four engine found in Imprezas and Legacys from the early 1990s until the early 2000s. It's as robust of an engine as Subaru ever built.

With an exhaust manifold ripped straight from an early 2000s Impreza STi, a heat exchanger from a WRX of similar vintage, and injectors from a later model Impreza G, and you have an engine more than strong enough to accept a single TF035 Forester S-turbo.

All this forced induction grunt is fed through, of all things, a five-speed manual gearbox out of an ancient, ex-Czechoslovakian Skoda 130 sedan. The flywheel between the engine and transmission also comes from this same Skoda. As for suspension, it consists of a custom multi-link setup in the front with progressive Bilstein B6 Shocks in the rear.

It's all brought to a stop by Seicento brake rotors with ceramic pads at all four corners and held to the road on a set of powder-coated BMW E21 13-inch rims. It's all made to run harmoniously thanks to an ECUmaster EMU Black engine management unit complete with a tune to accept the engine's upgraded EJ25 electronic throttle body for better fuel/air mixture control at all rpms.

According to JDM Serwis's own Facebook page, which again needed to be translated into English, the build is roughly "98 percent complete," with only a bit more fine tweaking of the car's ECU for better performance at higher RPMs. By their own admission, the team hasn't yet taken this lightweight and undoubtedly supremely powerful machine up much past 4000 RPM while they're still in the fine-tuning phase.

But rest assured, with all the amazing hardware that went into every single nut and bolt on this plucky Polski Fiat, don't be surprised if it takes every BMW M-whatever or Mercedes-AMG machine to whatever the Polish equivalent of Gapplebees. One can only assume said this mystical place has cheap, cold "Piwo" flowing like the mighty Vistula River and stories of vanquished BMWs and Audis flowing right along with it. 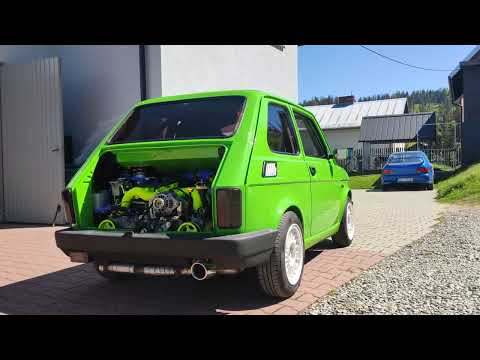