4 Porsche Estimated 7:18 Ring Time for New 911 Turbo, Expects It to Be Even Faster

Alex Oagana
In an era when an RWD Porsche is not only the quickest road-going model around the Nurburgring but can also accelerate the fastest from naught to 100 kph (62 mph), it's safe to say that the 2021 Porsche 911 Turbo S has a lot to prove when it goes on sale.
6 photos

According to Porsche insiders, the 992 Turbo S should slash that time by a massive 0.4 seconds, which is insane for a car that will also be slightly heavier than its predecessor.

Judging by the speed it seems to carry into those corners, it's probably safe to assume that the 2021 911 Turbo S will also go under 7 minutes on the Nurburgring. It could even destroy the 911 GT2 RS' best lap time, which currently stays at 6:47.3 minutes, but it probably won't go near the Manthey-tuned GT 2 Rs, which currently holds the road-legal record at 6:40.3 minutes.

Either way, it should do that while weighing almost 400 pounds more and with a lot less aero. Speaking of aero, the rather small, especially by 911 GT RS standards, movable rear wing on the 992 Turbo and Turbo S is now doubled by an even more pronounced movable front lip, which should help with grip and handling at higher speeds.

Despite Porsche promising a sports exhaust option, all 992 Turbos will come fitted with a gasoline particulate filter, which is why the prototype in the following spy video is fast as hell but you can barely hear the twin-turbocharged Boxer flat-six scream.

Thanks to Piezoelectric direct-fuel injectors and redesigned VTG turbochargers, the 991 Turbo will develop 600 horsepower, while the Turbo S will up the ante to 650 horsepower and 800 Nm of torque. The S version should be more than able to achieve a top speed of 340 kph (211 mph), or the same as the current 911 GT2 RS. A Carrera RS with similar specs might join it sometime in the future. 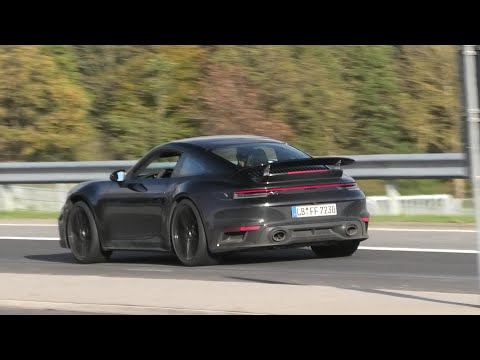