4 Carmageddon-Themed Tournament Kicks Off in Wreckfest

The new game follows the same gameplay formula as Wreckfest, but with an interesting twist. Stuntfest – World Tour mixes racing, crashing and destruction with a funny aimed ejection mechanic. The game allows up to 18 players to compete against each other in an elimination-based stunt show through various modes.

Once their vehicles are wrecked beyond repair, players will be ejected and catapulted hundreds of meters through the air. They will have to maintain control when maneuvering their character while gliding over vast distances and after crashing through huge obstacles.

The game also allows players to make use of quirky gadgets while they’re up in the air, allowing them to reach secret shortcuts. But the best part is that players who got ejected from their wrecked vehicles can recover after a high jump and dive back into the next car on the road.

In Stuntfest – World Tour, players will be able to upgrade and customize their cars or characters using the pit in the backstage area. Some sort of social hub is tipped to be in the game too, where players can get together and brag about stunts. 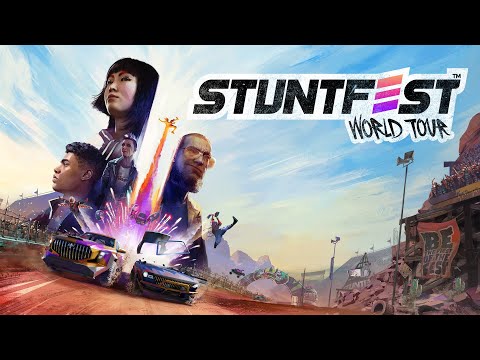