Bigger isn’t always better, because smaller and custom can certainly do the trick. That’s what Italian design studio Lazzarini Design is (probably) counting on with its latest creation, the Royal Alpha One.

Unveiled at the end of last month, Royal Alpha One is a more glamorous interpretation of the Alpha One, a yacht that, in its turn, seems to have spawned out of the design studio’s most famous project, the Jet Capsule. The Jet Capsule is also the only project from a very impressive lineup that actually got built, so Lazzarini is betting on an existing niche in the market.

With a reported price tag of “just” $4 million, Royal Alpha One is also tamer than most Lazzarini projects, but still able to offer luxury amenities and outstanding performance, which would increase its chances of securing a buyer. Should a multi-millionaire be on the market for a fast boat that looks incredibly futuristic and offers only the best in terms of amenities, this could be one worthy of 4 of his millions.

Comparatively speaking, Royal Alpha One is dwarfed by other Lazzarini creations, with a total length of just 65 feet (20 meters). Still, it has three decks and photochromic glazing throughout, which means it offers panoramic views on the water. The cherry on top is quite literally on top: a sunroof jacuzzi with a retractable bottom, and a lounge area that is as inviting as it would be comfortable.

For this project, head designer Pierpaolo Lazzarini looked to private jets for inspiration, just like he did for the Alpha One. Whereas that one is more like an executive suite of a private jet, which also makes it a good choice for premium water commutes, the Royal version is all about relaxation. The main deck, which includes the dining and socializing areas, still retains a more laid-back, minimalist aesthetic, with small tables and leather sofas and benches. But it could easily host a larger party at dock, if you wanted to.

Below deck are the sleeping quarters: the master bedroom, a VIP suite and a smaller cabin with two bunk beds, as well as a separate cabin for the crew. Each guest cabin has ensuite bathrooms and, while you don’t get all the trappings of an A-lister life (spa, gym, cinema), you still get plenty of private space and comfortable lodgings. A kitchen is also located here, with meals then brought up to the main deck for serving.

The upper deck is also the sun deck, with the unexpected addition of the jacuzzi and the mandatory lounge area. As mentioned above, the jacuzzi has retractable button, which means guests on the main deck can get a view inside (with or without swimmers) by simply looking up. You don’t have to be a multi-millionaire to imagine such a view can be an excellent conversation starter.

Both on the sun deck and in the enclosed space on the main deck, guests get almost unimpeded surrounding views. There’s a retractable swim platform at the stern, as well as an enclosed garage for several water toys, including an inflatable boat. Just because this isn’t a fully-fledged superyacht doesn’t mean you have to miss fun times on the water.

Lazzarini proposes the Royal Alpha One with a twin or triple Volvo Penta IPS propulsion system, and maximum speeds between 32 knots (36.8 mph / 59.2 kph) and 42 knots (48.3 mph / 77.7 kph), depending on configuration. For the more eco-conscious millionaire, the studio says a fully-electric setup is possible, with hydrogen-powered propulsion, and an estimated range of 120 miles (193 km). On diesel, the range of Royal Alpha One is estimated at 680 miles (1,094 km).

As photos in the gallery show, a model hull for the Royal Alpha One already exists, with Lazzarini saying it would take some 16 months to go from this to the actual boat, with carbon fiber superstructure. The only condition, according to the design studio, is that someone with $4 million to spend came along to ask for it. 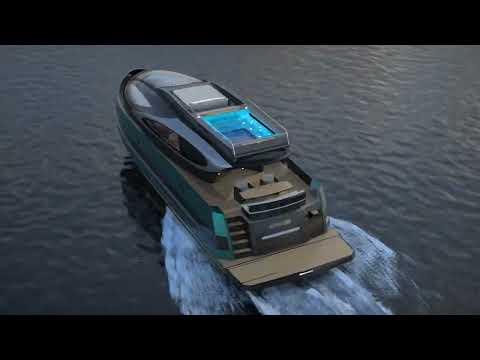 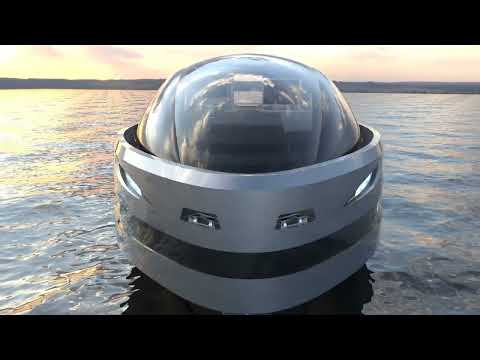