4 SBK 22 Promises Endless Nights of Racing on Two Wheels, Coming Out This Fall

5 Marc Marquez Will Get Fourth Operation to His Shoulder, Miss the Most of the Season
Car video reviews:
Coverstory

You can always count on a fair share of adrenaline-pumping action during a MotoGP race. Overtaking of any kind is spectacular to watch, and the crashes that occur quite often will have you holding on to dear life on the edge of your seat. As with all sports, several riders have what it takes to win a race. But you just never know who is going to be first across the finish line, and that makes everything even more exciting.

In 2021 Fabio Quartararo won the MotoGP championship title, after an intense, season-long battle against riders like Francesco Bagnaia and Joan Mir. History was written, as Quartararo became the first French rider to go as far up the ladder in MotoGP.

Looking at the nationalities of the Top 16 riders with the most titles won in the World Series you'll notice that they're split as follows: three riders from Italy, five from the United Kingdom, four from the United States, two from Australia, and two from Spain.

Quartararo has set off to a strong start for the 2022 season, piloting his Monster Energy Yamaha YZR-M1 to the top spot of the series rankings. After winning the previous two races, in Germany and Spain, his weekend in the Netherlands was considerably more difficult.

Seven minutes into the race, he crashed while making contact with Aprilia's Aleix Espargaro. With Aleix managing to stay on two wheels but losing precious time, Quartararo quickly jumped back on his bike and rejoined the race.

After returning to the pits for a quick inspection of the bike, he was advised to go back out and try to recover as many positions as possible. Just minutes later, a high side would put an end to his race weekend thankfully without any injury. Meanwhile, Ducati's Francesco Bagnaia was aiming for the top spot on the podium.

Meanwhile, Mooney VR46 Racing Team rider Marco Bezzechi secured his maiden MotoGP podium finish this weekend. Seven years after his Moto3 debut, Bezzechi helped bring Ducati a 1-2 finish at the Assen GP and he's likely to keep growing from here on after. The third fastest rider of the day was Maverick Vinales for Aprilia Racing, but everyone had their eyes on Aleix Espargaro.

Not only did he recover after the incident with Quartararo in the first part of the race, but he also crossed the finish line just 2.585 seconds behind Bagnaia! A total of 11 riders finished the race within 10 seconds of each other, just so that you can have an overall view of how close the battles are at this level. By comparison, the gap between the winner of the F1 Canadian GP, Max Verstappen, and Daniel Ricciardo who was the eleventh fastest, was just over 43 seconds.

Even with Quartararo's difficult moments in Assen, he is still leading the championship with a total of 172 points. Aleix Espargaro is 21 points behind in second place. Right now, Johan Zarco is holding on to third place, but both Francesco Bagnaia and Enea Bastianini will surely challenge that position in the next race.

Five different riders have secured a race win this year, with Bagnaia and Quartararo leading the way (3 victories each), Bastianini in second (2 wins), and Oliveira and Aleix Espargaro tied in third (1 win each).

Looking over at the Constructor Championship, Ducati is first with 246 points. Yamaha has to settle for second place and 172 points while Aprilia is in third. Over in the team rankings, Aprilia Racing is in the lead, with both Monster Energy Yamaha MotoGP and Ducati Lenovo tied for second place. With 9 more races to go until the end of the season, anything can and will happen. And we'll be happy to report back as it all unfolds! 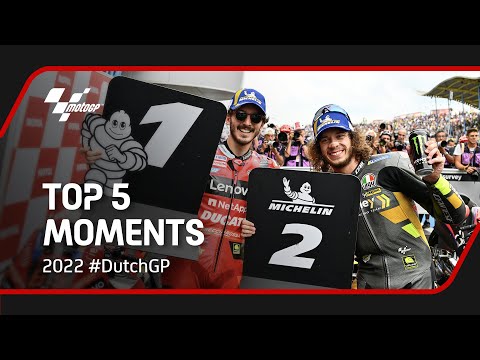