Home > News > Videogames
Cosmin Vasile
The launch of the Rocket League marks the beginning of a completely new game genre within the sports racing scene: soccar. Although there are quite a few games that mix football and racing elements nowadays, there haven’t been too many that try to implement something different into the mix.
6 photos

Developer Hugecalf Studios’ new game Turbo Golf Racing promises a slightly different formula for those who love Rocket League and other similar games. Instead of elements of football, the studio’s new game mixes golf and racing features in an explosive concoction that will probably keep players entertained for many hours.

Above all else, Turbo Golf Racing is a fast-paced arcade-style sports racing game for up to eight players. In the game, players will drive turbocharged cars, flip, glide, and dash them down winding fairways as they strike oversized golf balls toward the finishing cup.

Each course in the Grand Prix-style competition is populated with various obstacles or shortcuts, like secret tunnels, that will make everyon much more interesting than the other. The cars in the game are armed with weapons, so players can fire missiles at their rivals to stop them in their tracks.

More importantly, each car can be outfitted with a Power Core, which must be unlocked first. In Turbo Golf Racing is not enough to hit the ball further or fly faster than your rivals. You must also use unique abilities such as Ground Stomp and Gravitate Ball and Roll in order to outwit them.

Of course, the customization part couldn’t have been skipped, so expect a slew of personalization options to be available for your turbocharged car. There are endless paint options that will allow players to change their wheels, spoiler, shield, car body, and boosters.

But the best news about Turbo Golf Racing is that it’s now available to play for free on PC, Xbox One, and Xbox Series X/S. The beta version of the game can be downloaded right now from the Steam page, or you can register for the preview via the Xbox Insider app on the Xbox console or Windows Store. 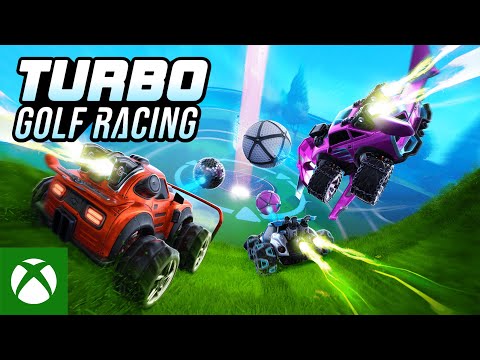