Whenever there is a huge drag racing event with lots of cool vehicles, it is sometimes easy to miss the most enticing runs among the crowd of low-key competitors. But that probably won’t happen on an intimate quarter-mile strip.
18 photos

Let's take the person behind the Jmalcom2004 account on YouTube, who usually tends to such informal features and loves to carefully select racers. Usually, for a vehicle to make it on this channel, something special needs to go down. And we have lots of past examples, including that one time when a ten-year-old raced his dad’s SUV.

Alternatively, we could also enjoy the moment when a nitrous big-block Chevelle fought so hard against an all-motor Cutlass the winning car blew its rear window during the race! Old school racers are an important part of the community for the intimate little drag strip he usually dwells around, although we have seen nice features (again, with noteworthy cars) at major venues as well.

This time around, one only needs to check out the exciting reactions from the crowd around the cars to understand the passion and soul that get put into these skirmishes. And they don’t even benefit from the modern time-keeping technology of late. They are lucky to have a Christmas tree (a mobile one), so do not go asking about ETs and trap speeds.

Luckily, the battle winners are easy to make out. Both runs take place with a cool LS-swapped and nitrous-fed first-generation Chevy Camaro in the left lane. On the right side are a couple of interesting opponents, as well. One would be a badge-less and headlight-less Chevy S-10 pickup truck.

The other is a wheelie-prone station wagon. And by the looks of the half-white and half-blue paintjobs, these latter two might belong to the same crew. We could easily imagine these skirmishes might act as grudge races since the Camaro’s driver fights hard to keep ahead of them both. Alternatively, we could also give up a moral win to the car that roars the loudest, right? 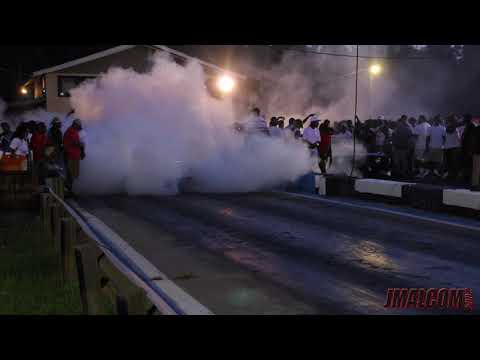