5 Hirvonen Crashes Out of Rally Finland
Up Next

Nationwide Format to Change, No Chase for the Series

Strangers Save Man from Burning Car 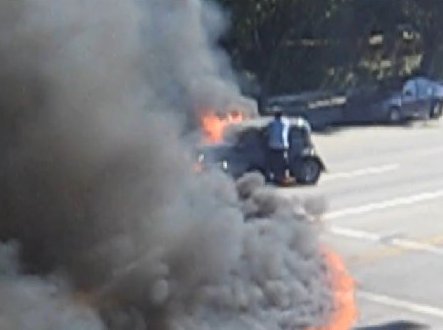 A very dramatic car crash took place on Sunday in Sherman Oaks in the San Fernando Valley area, an accident which if it weren't for an exemplary ad hoc rescue mission would have come and gone just like any other incident.

A 69-year-old man was driving a classic 1932 Ford on Burbank Boulevard, when, while being stopped at a red light at Vesper Avenue, was rear-ended by a Hyundai. The Ford was propelled into the oncoming traffic and soon after burst into flames.

The owner of the Ford would have died of a terrible death hadn't it been for one man who immediately jumped, literally through flames, to help the victim. After several seconds, another man joined him, then another and another.

One of the people broke the car's windows with a crowbar, while another was fighting the flames using a fire extinguisher. The others were pulling the old man from the car.

The whole scene was caught on tape by a neighbor, Patrick Murray, who was inspired enough to film the entire scene.

"If you watch the video, you could see that I was shaking," Murray told Daily News. "These guys are desperately trying to get this person out of this vehicle. Even in the video you can hear one man screaming, 'Get him out of the car!'"

What's strange is that the four heroes did not stick around to get a pat on the back. The Los Angeles Police Department is currently looking for them and ask anyone who know anything to call LAPD's Valley Traffic Division at 818-644-8000.

Obviously, no harm will come to them...

According to the police, the crash resulted in five people being injured, none of them seriously.