I’m not a fan of the fifth-generation Supra, but I don’t blame Toyota for plowing through BMW’s parts bin either because developing a low-volume sports car from the ground up is a thoroughly expensive affair. Better still, the turbocharged inline-six engine perfectly matches the automatic transmission supplied by the best name in the business, ZF.
40 photos

For the 2021 model year, the Japanese automaker has upgraded the 3.0-liter plant from 335 horsepower at 5,000 revolutions per minute to 382 horsepower at 5,800 revs, which is a 14-percent increase. 3.9 seconds to 60 miles per hour (97 kilometers per hour) is thoroughly impressive for this kind of vehicle, more so if you compare the MKV with the M3/M4 siblings.

Tipping the scales at 3,397 pounds (1,541 kilograms), the Supra in the following video is considerably lighter than its unlikely challenger. The Infiniti Q60 isn’t stock, though. Rated at 4,024 pounds (1,825 kilograms), the luxury coupe features a little tune from Hussain Boxwala at Racebox, a software-only tune that unlocks a Red Sport-like 400 ponies at the crankshaft. The race map reportedly adds 50 more wheel horsepower according to the owner thanks to more turbo boost pressure and timing increase.

On the first run, the Infiniti claws into the strip much better due to all-wheel drive versus Toyota’s rear-wheel drive. Be that as it may, the Supra catches up and surges ahead in the first race. Second time out can only be described as a replay, but the Q60 has the upper hand from a roll. It should also be noted that the Infiniti was in the aforementioned race map in the roll race.

Impressive as it may be, the MKV won’t have it easy next year when the 2022 Nissan Z will arrive at dealerships with the same powerplant as the Infiniti Q60 Red Sport 400. The successor of the 370Z will also feature a three-pedal setup, making it far more appealing than the Supra for a very select group of driving enthusiasts. Lest we forget, U.S. customers vastly favor torque-converter automatic over the row-your-own manual gearbox. 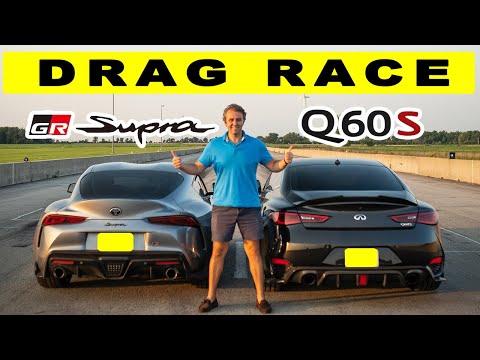