2 770 hp SLS AMG by Kleemann is a Tire Destroyer

Alex Oagana
If both cars in the following video would have been stock, the result would have probably been even more shameful for the BMW, but even as they are in the footage the race isn't exactly fair.
1 photo
A stock BMW M6 of the E63 generation is a force to be reckon with even in 2013, with its epic-sounding S85 normally-aspirated V10 developing 507 hp and 520 Nm (384 lb ft) of torque.

A stock Mercedes-Benz SLS AMG is on a whole different level though, it's roaring M156 normally-aspirated V8 outputting 571 hp and 630 Nm (465 lb ft) of torque.

The M6 also weighs quite a bit more than the SLS AMG, but the model in the footage has been tuned, with an ECU tune, headers, exhaust, air filter and a pulley kit. We don't have official power numbers but the above mods should make for at least 100 extra horsepower.

Unfortunately for the BMW, despite the whatever extra power its V10 engine makes, the SLS AMG pretty much walks away in both races from the following video. 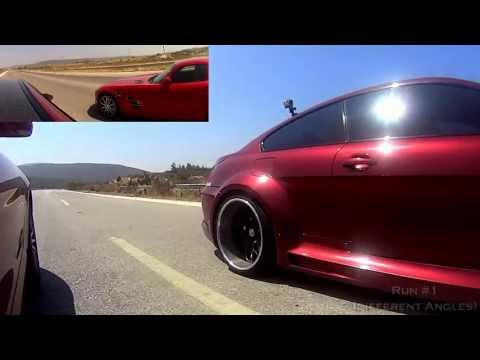