Witness the Birth, Downfall, and Rebirth of the World Record-Setting "The American Dream"

Sergiu Tudose
Even though both of these cars are two-door coupes with rear-wheel drive and front-mounted V8 engines, they can be very different when it comes to outright performance. That includes handling, where the Mercedes clearly has the upper hand due, in part, to its smaller dimensions.
6 photos

That said, we’re only getting to see them race in a straight line, as far as this video is concerned, which means that power, weight, and gearboxes come into play, while the chassis itself, steering capability, and everything else become less important. We also need to point out that neither car features any modifications, making this race as fair as possible.

Let’s talk about the Mustang first. It’s a Shelby GT350, which along with its GT350R sibling, enjoyed a production run spanning a total of five years before handing the reigns unofficially to the new Mach 1. Power comes from a 5.2-liter flat-plane crank V8 engine, putting down 526 hp (533 PS) and 429 lb-ft (582 Nm) of torque, which is then sent to the rear wheels via Ford’s Tremec TR-3160 six-speed manual gearbox.

Right off the bat, the Mustang is at a disadvantage compared to the AMG GT S, which features a seven-speed AMG Speedshift dual-clutch transmission. The Mercedes also weighs about 130 lbs (60 kg) less, basically the weight of a relatively small passenger.

The two cars raced three times, and calling out a winner wasn’t at all difficult. 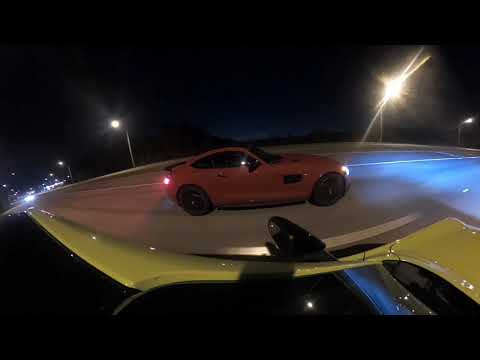