BMW’s legendary S85 5-liter V10 engine that used to power E6x M models will forever have a special spot in our collective memory. It was probably one of the best units the Germans ever put out and even inspired the creation of the S65 4-liter V8, but it was still an atmospheric unit.
1 photo
Don’t get me wrong, naturally aspirated engines are brilliant on the track and even in daily usage due to their incredible pedal feel. Furthermore, in the case of the S85, the pedal response was so sharp you were afraid not to cut your toes on it but, forced induction brings about a lot of advantages.

The most important one is the extra torque you get from the lowest RPMs possible. The video below is a perfect example as to why, in a straight up race, turbos will always win.

The figures are close but in the end we don’t really know what the BMW is pushing. We also don’t know if it’s using a manual or automatic gearbox and even if the second choice was the one on the M car it wouldn’t be as fast as the Nissan’s. Let’s take a look at how things went down on the track though. 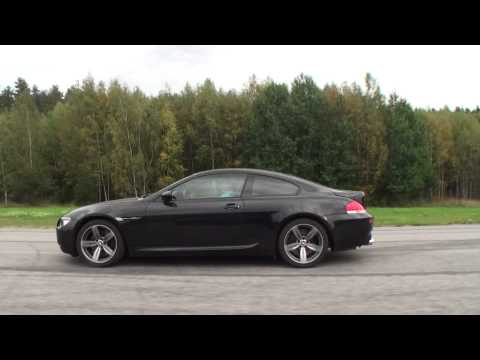