4 UPDATE: McLaren P1 Catches Fire in the UK, Burns in the Middle of Intersection

The McLaren 720S is a real monster when it comes to outright speed, even though it hasn't got the AWD of some of its competitors. 720 HP sounds like a lot, but as is often the case with performance cars, that figure is only a minimum.

The guys at Drag Times strapped their own example to the dyno. But before they can do that, they need to take off the rear air diffuser, so it doesn't get damaged.

The result is 691 horsepower to the wheels. That's U.S.-spec, so in European numbers, it would be more like 701 HP or about the same as what a Lamborghini Aventador makes at the crank.

Factoring in the 10% drivetrain loss of the older 12C model, they conclude that the 720S is actually putting out about 770 HP. That's partly because McLaren opted for a higher displacement V8, but pretty much every component under the hood is better.

It's crazy when you consider how many fast cars have half that power, including a Porsche 911. This pretty much puts the British supercar in a class of its own.

Usually when we see weird dyno numbers, we can talk about people who don't understand what they're doing or defective equipment. But this looks like a state-of-the-art facility built to test high-horsepower tuned cars. The errors are probably in the region of 1%.

When it comes to fast cars, it's better to understate the power because it creates word-of-mouth organic advertising. That's how many people became attracted to the Skyline.

However, you can't really do that with naturally aspirated engines. We recently saw how an old Ferrari FF couldn't reach its claimed output even with tuning parts. Even at a third of a million dollars, the 720S is amazing value for money. But maybe we should start calling it the 770S. 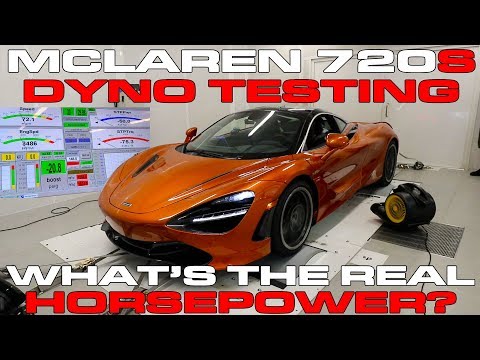