In a rational world, the following drag race would have only one outcome: the RS6 would blow the M5 out of the water. However, the world is not perfect for for some strange reason things didn’t go as planned. As Morpheus would put it: there’s a glitch in the Matrix.
1 photo
If the Audi was stock, once again, the M5 would also have to put up a good fight to take it. That’s because in its stock guise, the RS6 has 580 HP and 650 Nm (479 lb-ft) of torque coming out of its 5-liter twin-turbo Lamborghini V10 engine. Add all-wheel drive to the mix and you’re going to have a bad time drag racing this family car from a standstill.

That might’ve been true when the car was stock but according to the video’s description, this particular model was tuned by MTM and now has 700 HP and 785 Nm (578 lb-ft) going from the engine to all four corners of the car.

Comparing that to the M5 makes you wanna stop from watching the following clip. According to the same description the Bimmer is also stock which means it can rely on ‘only’ 560 HP and 680 Nm (501 lb-ft) from the 4.4-liter twin-turbo V8 under the bonnet.

Those seem to be the facts but in the end, the BMW steals the show and makes the Audi look like an old Golf in comparison. Something’s not right here... 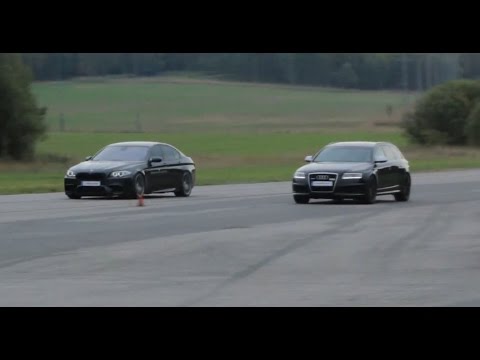