4 4WP Ford Bronco Shown From All Angles and in Action, Looks Trail-Ready Awesome

Just about everybody knows that Ford prepared the sixth-generation Bronco as a direct competitor for Jeep’s Wrangler series. And that includes major attention given to popular off-roading scenarios where the latter traditionally excels.
27 photos

If we recall correctly, Broncos in Moab and undertaking the popular Hell’s Revenge challenge isn’t exactly fresh news. They did it with a pack of pre-production prototypes last year in a bid to iron out any issues ahead of a release that’s eagerly awaited to this very day.

Now, almost a year later, Ford decided to occupy its time with another go at the Moab, Utah scenery. It’s been facilitated by the decision to showcase during the Easter Safari its brand-new partner-developed Broncos created by Ford Performance, RTR vehicles, ARB, and 4 Wheel Parts.

There’s been an abundance of interesting footage and all sorts of happenings, from Vaughn Gittin Jr. and his “fun-haver” teammate Loren Healy checking out the scenery from the Top of the World Trail down to a bunch of Broncos synchronize-dancing their way into a five-vehicle 180-degree turn via Trail Turn Assist.

Now, in between all the walkarounds with the custom aftermarket releases, we just can’t sign off from Moab without seeing the 2021 Bronco take up at least one of the traditional challenges. Luckily, we have vlogger Justin B. McBride on call with some great and quite cinematic footage of what’s going on around there.

Better yet, he went along for a cool ride that saw the three bespoke Broncos led on an adventure by none other than Vaughn Gittin Jr. as he took control of a stock 4-Door Badlands with the Sasquatch package. Justin was even inside the car as the RTR head honcho drove up Hell’s Revenge from the 4:14 mark.

Interestingly enough, we also find out (at the 7:05 mark) that although the RTR Bronco also went up the challenging trail without issues (we see it for a fleeting moment resting at the top), the ARB and 4WP rides decided to opt out. That is a bummer because we really had the latter on our shortlist of favorites.

And what do you know, a few seconds later, we happen to see a Wrangler Unlimited casually rising up to the challenge. 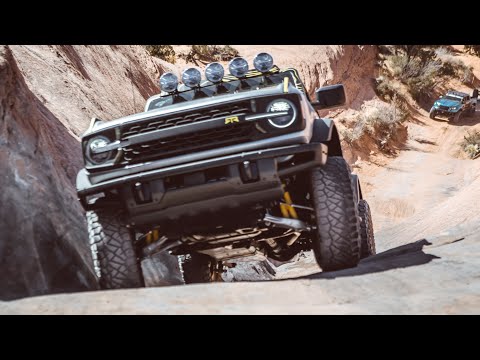