3 2022 BMW M5 CS Is Not Even Official, But Its Parts Can be Purchased Online

4 The 2021 RS e-tron GT Isn't Official Yet, But Here Are the First Reviews

Still Unofficial, the 635-PS BMW M5 CS Goes for a Hot Lap on the Hockenheim

Recently, all eyes have turned on the BMW #NextGen 2020 event that so far brought us the premiere of an interesting scooter concept (Definition CE 04), as well as the first look at the group’s new technological flagship, the fully electric BMW iX. But the Internet world seems to be just as interested (or more) in the classic business sedan from Bavaria... with high-performance credentials.
32 photos

The German automaker’s 5 Series has been thoroughly updated and the fans also received the M5 and M5 Competition soon after. That means the business sedan with a 4.4-liter V8 that can reach up to 625 ps is among the freshest offerings from Bavaria these days, but it seems that’s still not enough.

So, the premium German automaker is diligently preparing the hotter M5 CS for those who (always) crave for a little more. Thing is, we’ve seen the model pop un the oddest of places as of late. Earlier this week we caught the M5 CS without any camouflage... err, better said, we found parts of it dwelling in an online listing.

Now here’s the whole car, complete with camouflage on the bits that shouldn’t be common knowledge yet, doing a hot lap on the Hockenheim grand prix circuit courtesy of the German sport auto YouTube channel. Yes, the BMW M5 CS remains unreleased... so far.

At least, we get some insights before the official announcement - and we’re not talking just about the final lap time posted by sport auto test driver (and racer) Christian Gebhardt. Because sport auto is our kind of YouTube channel, they’re usually letting these hot laps roll without any audio commentary – just a few beauty shots and some technical specs shown in advance.

One of those cards is also spilling the beans on the actual power credentials for the 4.4-liter V8, signaling a power bump of 10 ps over the M5 Competition to a grand total of 635 ps (626-hp). We also noticed the torque remains the same at - 750 Nm (553 lb. ft.) - before our attention was grabbed by the new, lightweight, seats.

Moving on to the actual lap, it’s an early indicative of its place on the hot sedan leaderboard, as the 1:53:6 time is clearly not in the same league as sport auto’s best laps of the track (McLaren’s Senna takes the honor, with 1:40:8). Still, it’s out there with other four-doors, such as the recent new lap record holder in the “fastest luxury vehicle” category, the Mercedes-AMG GT 63 S 4-Door (1:52:8). 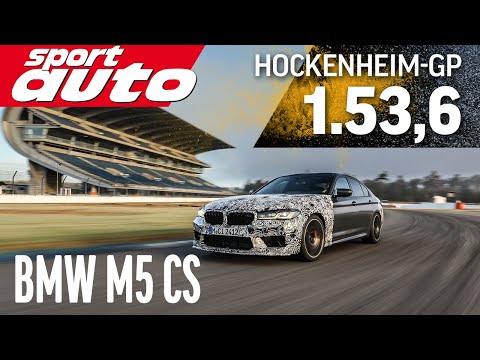