3 Golden Porsche Panamera is “Too Shiny,” Too Dangerous For German Roads

Apparently, July 24th was a great day for Porsche. They were casually enjoying an air temperature of just 22 degrees Celsius (71.6 Fahrenheit) as well as a Nurburgring Nordschleife track temperature of 34 degrees Celsius (93.2 F) alongside their yet unreleased mid-cycle update for the Panamera. When, all of a sudden, test driver Lars Kern got the longing to complete a fast lap and come up with a time of 7:29.81 minutes across 20.832 kilometers...
13 photos

Now, seriously, this is how we imagine new records are born at Porsche. Especially since the Nurburgring Nordschleife track record story has become the “Desperate Housewives” of the automotive industry. Automakers are competing against each other to bring us soap-opera levels of comedy, mystery, and drama every time they set out to deliver new times on the iconic German track.

For example, the Stuttgart-based carmaker has decided the inaugural strike in the teaser campaign for the upcoming Panamera facelift should include an (incredibly) particular record achieved on the North track of the Nurburgring that summer day in July.

The highly specific term – officially certified by a public notary – used by the company is for a new record in the “executive cars” category. In our rule book the Panamera is a four-door car. Not really a sedan due to its liftback rear end, though. And by that judgment there is a slew of other cars that bested its time.

Let us first take a direct competitor, the Mercedes-AMG 63 S, which did the hot lap in 7 minutes 25.41 seconds. Technically not even this was the fastest time in the four-door sedan category. That honor would go towards the Jaguar XE SV Project 8, with 7:21.23 minutes.

But things get muddy fast: Mercedes is not calling his AMG GT a sedan either, just like Porsche. And one could argue against the Jag because the unit used for the attempt had the Track Pack option installed, which nixes the rear seats in favor of a roll cage, among others.

Back to the upcoming facelift for the Panamera, Porsche has not even bothered to cover in full-body camouflage the production-series example it used for the record attempt. This is how we know cosmetic changes are on the subtlest of levels. The sports car maker is instead focusing on chassis and powertrain modifications that would increase both comfort and sportiness.

Yes, in Porsche’s book the two notions are not mutually exclusive – and the company pledges a Panamera revamp with increased engine power as well as enhancements in terms of “cornering stability, body control and steering precision,” according to Thomas Friemuth, vice president for the Panamera range. What they did not say, though, is when the new Panamera will become official. 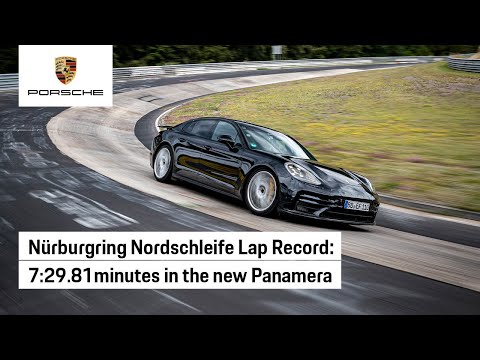