3 Feisty Honda Prelude Drags Chevy Camaro, Someone Gets Sent Back to Race School

Although it might look simple to the untrained eye, quarter-mile dragstrip enthusiasts know there’s fine art when racing in a straight line. Well, it seems that not everyone involved got the memo, though.
21 photos

Fans of all ages are entertained by drag races and the sport is so popular not only because it is simple and easy to understand. Instead, everything that happens at the track is like a carefully choreographed ballet, at least most of the time. As always, though, exceptions do happen.

And there is no need to take our word for granted. Instead, the good folks over at the Wheels channel on YouTube have a manual versus automatic brawl to showcase in the latest feature embedded below (and uploaded on October 6th). Also, it is not really a sight to behold at Bandimere Speedway, frankly.

Known in the NHRA as Thunder Mountain, this quarter-mile dragstrip located just outside Morrison, Colorado, and Lakewood, Colorado, is a facility that can entertain tens of thousands of fans, though only if the racers do their part, as well. For example, this skirmish is between a black, menacing Ford Mustang GT and a white-and-black Chevy Camaro LT1.

According to the succinct description, the GM car is equipped with an automatic transmission while the Blue Oval rival went the traditional way of the stick shift. Only it seems the driver chose wrong. So, the first pass sees the latter jump the start (as per the reaction time) and wrongfully win the battle with a 12.44s pass against the Camaro’s 13.33s run.

Thus, it was only logical they went for a rematch, but the second pass wasn’t a pretty sight, either. This is because the Mustang GT driver made the car act like it was about to puke and only then went on its (I almost said merrily) way to deliver a forgettable win, as per the 12.85s versus 13.53s result. All in all, it’s instructive to see that a modified car (one can obviously see the ‘Stang’s intercooler) cannot do all the work by itself – it also needs someone at the wheel who knows what they are doing… 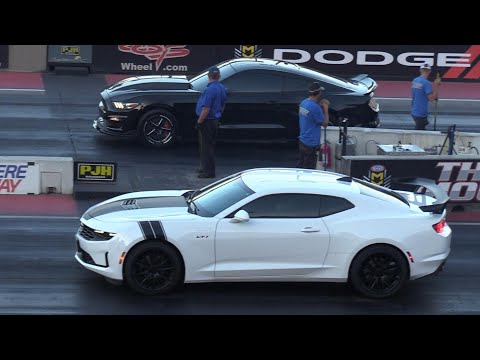