1 Someone Embezzled a Lot of Money to Buy Expelliarmus, a Luxury Sea Ray 460 Sundancer Yacht

2 Polish Billionaire’s Megayacht Is a Dazzling Masterpiece, With Three Pools and Two Cinemas

4 Richard Burton's Classic Superyacht Kalizma Has Been Brought Back to Life, It’s Glamorous

5 Megayacht That Used to Belong to Johnny Carson Can Be Chartered for a Not-So-Small Fortune
Car video reviews:
Space Junk

Something most people don't realize is that superyachts take lots of time and money to build. In the case of Venus, the would-be owner, Steve Jobs, never got around to enjoying what this yacht had to offer.

Steve Jobs Never Saw the Completion of His Questionably Priced Venus Superyacht: You Can

Folks, this is the story of a ship commissioned by the late Steve Jobs, and since it was delivered by its builders in October 2012, the famed businessman never got the chance to enjoy what his vision had to offer.

Now, like most other superyachts, rarely is just one team responsible for the machine you see. In the case of Venus, Jobs relied on the expertise of Feadship to bring this machine to life. But the visual design of Venus was in the hands of Phillipe Starck.

The name Feadship you've heard before here on autoevolution and the fact that people like Steve Jobs sought out their expertise should tell you something about their history and abilities. This crew has been around since 1949, but their history actually dates back to 1840 under the Royal Van Lent Shipyard. The word 'Royal' is enough to hint at how this crew operates.

As for Phillipe Starck, this world-renowned designer has nothing to do with Tony (Iron Man), but his career of over 10,000 creations is enough to tell you this gentleman and his team are perfect for a ship like Steve's. Over the years, Starck has developed interiors, industrial designs, vehicles, lighting, and a whole yacht-load more. Both the interior and exterior designs are completed by Starck.

According to Feadship, aluminum is the primary building material; from hull to superstructure, the lightweight metal is king. This is a bit different from ships with the commonly-used steel hull. Powering this behemoth along at cruising speeds of 16 knots (18.4 mph) and a top speed of 22 knots (25.3 mph) are two MTU 16-cylinder engines with 3430 hp each.

Now, as simple and iPhone-like that this ship may seem, the interior does feature six suites, suitable for up to 12 guests. 22 crew members will be making sure everyone is happy. Sadly, because privacy is still king and probably ended up costing the Jobs family quite a bit of hush-hush money, we have no images regarding the interior. Even Yacht Charter Fleet, a renowned ship database, isn't sure what's really inside this vessel.

Personally, I'm sure there's room for things like a spa, entertainment rooms or cinema, bars, lounges, and a slew of other spaces, all destined for luxury, comfort, and style. All the glass windows tattered all over the hull are a clue to what may be inside. To help guide your imagination, I've added some interiors from Phillipe Starck. Just try not to stare for too long.

The only point of reference we have regarding the style of the ship is the exterior and its cues. One place I'd like to attract your attention to is the bow. Here, guests and owners can cruise in style in a forward-facing jacuzzi built right into the deck.

Towards the superstructure, a massive deck space not only offers the room needed to set up lounges and other furnishings, but it can also be used for alfresco parties and dining. This deck also wraps around that central structure and leads aft.

Looking closely at the images, the rear showcases platforms integrated into the hull. Experience tells us that these are used as access to a tender and toy garage or just used for lounging. Aft sits the entry onto Venus and also acts as a beach deck. But, when in motion, the beach deck raises and seals off the rear.

Now, the real mystery is how much Venus ended up costing the Jobs. Well, there's heated debate on that. Some sources say around 105 million USD, others say 230 million USD. Nonetheless, if you own an iPhone or other Apple device, this was possible because of you. 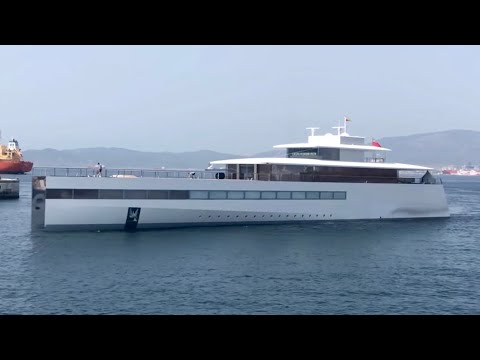 Editor's note: A video of Venus has been added to the article after publishing.