According to the Economics of Land Degradation report, cited by the Harvard University, financial losses caused by land degradation cost up to $10 trillion globally each year. Usually, fighting erosion is possible, but only by using bulky, heavy and expensive solutions and construction machinery.
3 photos

But what if there was a cheap, tiny fix to this problem? Say a robot whose sole purpose for being is to stick metal sheets into the ground?

This May, at the International Conference on Robotics and Automation in Canada, a team of engineers from Harvard’s Wyss Institute for Biologically Inspired Engineering will present Romu, an automated robot mean to help soil in exposed areas stand its ground.

The four-wheeled Romu uses a vibratory hammer and its own weight to drive interlocking steel sheets into the ground, helping secure it in place against erosion caused for instance by water.

The robot was tested, as seen in the video below this text, on a beach, and it proved it can stick into the ground sheets of metal that are much taller than its own range of vertical motion and can fend off incoming waves, while keeping the sand behind them intact.

The team behind the project is hopeful that the tiny Romu could one day lead to specialized automated machines for construction and land management efforts. They could also be working in swarms, constructing for instance walls in areas that are not accessible or safe for humans.

“The swarm approach gives advantages like speedup through parallelism, robustness to the loss of individual robots, and scalability for large teams,” said in a statement  Justin Werfel, one of the people behind the project.

“By responding in real-time to the conditions they actually encounter as they work, the robots can adapt to unexpected or changing situations, without needing to rely on a lot of supporting infrastructure for abilities like site surveying, communication, or localization.”

More details on the Romu can be found in the video attached below. 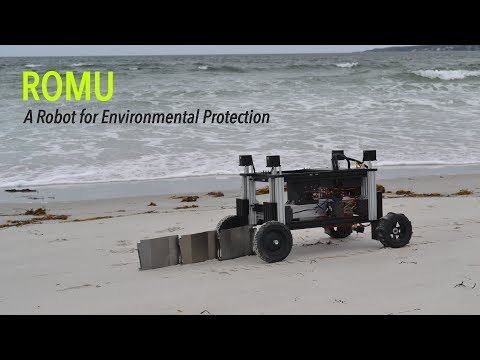