1 The U.S. Has to Pay for Billionaire’s Superyacht After Seizure, and It’s Not Cheap

2 Russian Gold King’s Megayacht Trapped in Fiji as the U.S. Is Trying to Seize It

3 $85 Million Ragnar Superyacht Is on the Move Again, After It Was Denied Fuel in Port

Elena Gorgan
In what analysts are describing as a new trend in the sector of luxury yachts with dubious ownership, Russian oligarchs are turning to Turkey as a safe haven for their toys. Another megayacht is fleeing for safety, racing to Turkey and quite possibly a spectacular “vanishing” act.
7 photos

The megayacht in question is Titan, a $100 million vessel owned by Evraz billionaire Alexander Abramov. He is not currently on sanctions lists from the UK, Europe or the U.S., but he was included on the Australian list last month. Shortly after this, Titan left Dubai and is now “racing near top speed to reach the Suez Canal,” Bloomberg reports.

Since the start of the war in Ukraine in February, Titan has been docking in friendly ports in the Maldives and Dubai, which still welcome vessels of Russian oligarchs. However, the official inclusion of Abramov on one list of sanctions has prompted the search for yet friendlier waters, so Turkey seems to be the next obvious stop. Like many other superyachts before it, once it arrives in Turkey, Titan will probably stop broadcasting its location and “disappear.”

Titan comes with a $100 million price tag and was built on commission for Abramov, at Germany’s Abeking & Rasmussen shipyard, and delivered in 2010. With an interior and exterior design by Reymond Langton Design Ltd., it is the largest of three sister ships, measuring 78 meters (256 feet) in total length. Currently sailing under the Cayman Islands flag, it has a steel hull and aluminum superstructure, and can accommodate 14 guests and 19 crew.

According to the report, Titan is putting those Caterpillar engines to maximum use right now to avoid being impounded. 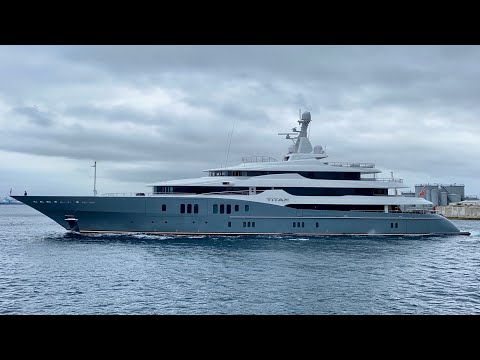