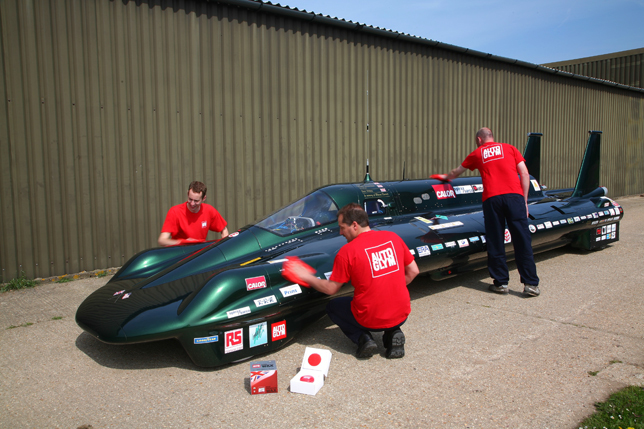 Before getting shipped to USA for trying to beat the world land speed record for a steam-powered car, ‘Inspiration’ got a new look to go with its design and performances.

The UK team who build it took the car to the car care experts from Autoglym who had to reduce surface drag and enhance the appearance of the vehicle with a coat of its super-durable High Definition Wax.

Inspiration’s record attempt is scheduled at Edwards Air Force in the Mojave Desert, California, in August 2009. The team will try to break the 145 mph US national record (set in 1985) and the FIA record of 127 mph (set in 1906). In order to hit 170 mph, as they hope, the team made all the efforts needed to optimise aerodynamic performance and reduce drag.

Autoglym’s High Definition Wax was applied to Inspiration’s metallic British Racing Green paintwork to help the car to cut through the air with minimal resistance.

The British team behind Inspiration will also take with them a selection of Autoglym products to maintain the car slippery and looking good for post-attempt photography.

“The car looks fabulous and will stay looking great thanks to the application of High Definition Wax,” commented David Rogers, Autoglym Sales and Marketing Director. “We are immensely proud of our British roots and our strong motorsport links. Inspiration is a real testament to British engineering, and we wish the team all the best for its record attempt.”

Autoglym is well known for preparing the looks of several record challengers, such as the world record-breaking ‘Thrust 2′ and ‘Thrust SSC’ cars and the McLaren F1 supercar when it broke the record for the world’s fastest production car.