Due to their magic carpet ride and ultra-luxurious interiors, we don’t get to see that many Rolls-Royces put their straight-line sprints to the test. However, this particular example apparently forgot that it is big and heavy, and decided to try its luck against a Ferrari 458 Spider.
6 photos

Sporting a two-tone look that combines matte grey and shiny black, the luxury British car, which appears to be part of the first generation (Series I), was filmed at a drag racing event in the Netherlands, going head-to-head in a standing start drag race with the Italian supercar.

When the lights turned green, both drivers released the brake pedal and set off. The stock Ghost needs around 5 seconds to hit the 62 mph (100 kph) mark from a standstill and will run out of breath at 155 mph (250 kph). By comparison, the 458 Spider is much quicker, needing only 3.4 seconds for the acceleration and topping out at 199 mph (320 kph).

Tipping the scales at nearly 3 tons (6,480 lbs), the Rolls-Royce Ghost is almost twice as heavy as the Ferrari 458 Spider. Therefore, you know which one is going to cross the finish line first, now, don’t you? The action starts at the 2:03 mark in the video shared down below, which also shows the supercar take on other fast rides. 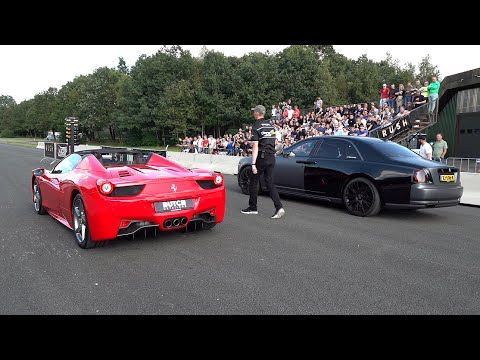