Sebastian Toma
Ever wonder what does someone needs to do to start a world championship-winning race car from the late 2000s? Well, wonder no more, as Henry Catchpole of Carfection has gotten close and personal with Sébastien Loeb's 2008 Citroën C4 WRC. This model managed to win every tarmac rally it entered from 2008 to 2012.
7 photos

Catchpole was fortunate enough to get a ride from the most successful rally driver ever back in 2008 in a C4 WRC just like this one, but this time he was also allowed behind the wheel. If you are wondering why this is important, championship-winning rally cars are worth a lot of money even after their careers have ended.

In the case of chassis number 14, it is currently owned by Girardo & Co. Currently run by Max Girardo, the company focuses on preserving iconic sports cars and racing cars of all time. That is why this model is in the Red Bull livery that was revealed later in the 2008 season.

This example of the Citroën C4 WRC is worth even more money than some of its homologs because Formula 1 World Champion Kimi Räikkönen also drove it. While his entry in Rally Mexico resulted in a DNF, he was still behind the wheel, and he knew what he was doing, so just let him do his job.

Back in 2008, homologation rules permitted the weight of 1.230 kilograms (2.711 lbs.), a power of 324 hp, and 430 lb.-ft (583 Nm) of torque. The Citroen C4 WRC comes with an active center differential and mechanical front and rear differentials. Henry walks us through the steps required to start it up and get it going.

It does not seem that difficult from behind the screen, right? Well, not exactly. We will have you know that the era of WRC cars had a clutch that was tricky to operate by foot, and the driver needs to be confident on the gas and let it slip when departing from a standstill. Otherwise, the engine will stall. Do not worry, as the clutch of WRC cars is made to handle a rough ride. The clutch was also meant to only be used from a standstill, as other gearshifts would be done through the paddles behind the wheel or the floor-mounted shifter.

So, feel free to enjoy the video below and see some of the coolest parts of the 2008 Citroen C4 WRC car. Fancy some WRC action? There's a free WRC 10 demo just waiting to be installed. 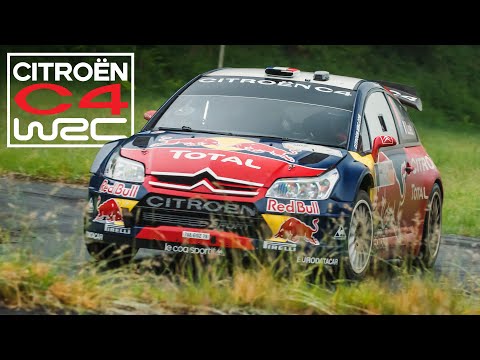