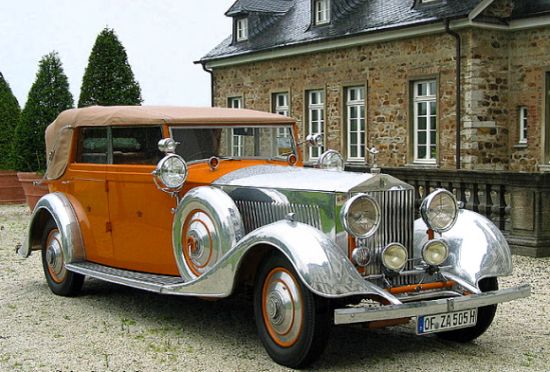 The owner of the Rolls Royce Museum in Main, German Hans-Gunther Zach is planning to sell of his entire collection, that includes the renowned ‘Star of India’, a one-off 1934 Phantom II 40/50 HP Continental “All-Weather Convertible,” custom made for the Maharaja of Rajkot.

The car is reportedly the most expensive in the world, Born Rich tells us, as it is priced at 10 million euros ($14,28 million). The collection also comprises 24 Rolls-Royces, 3 Bentleys, and three other famous cars.

A 1926 Rolls-Royce 40/50 HP I Open Tourer commissioned for the Maharaja of Nanpara, a 1920 40/50 Silver Ghost Coupé de Ville made for Jean Hennessy, and, called the Hunting Car, a Phantom II Cabriolet that belonged to the Maharajah of Rewa.

Returning our attention towards the ‘Star of India’, the seven-seater’s coachwork was made by Thrupp & Maberly, but it’s actually the paintwork that makes it a very special car. The bonnet and wings are made of polished aluminium and the rest of the body is of a saffron ochre finish, a shade that is considered a symbol of purity in India.

The interior of the car is also made entirely in ochre, and the dashboard is marbled with saffron paste. Another special trait of the car is its large number of headlights. The two fog lights follow the movement of the steering wheel, while in front of the windscreen, two small lights flash in orange.

Two other huge searchlights on the right and left side of the windscreen also stand out, as well as two little lights above it with integrated mirrors on their flipside. Visible on all doors and side windows is Rajkot’s state crest with an inscription meaning “An impartial ruler of men of all faiths.”