2 This Boeing Spaceplane Could Have Been the Ultimate Space Freighter, Exists Only Here

4 Nuclear-Powered Airliner Can Carry 600 Passengers at Mach 6, But Only in Sim

5 Star Raker Spaceship Concept Could Have Changed the World, CGI Video Shows How
Car video reviews:
Up Next

Back in the 1960s, it seemed like the entire attention of the people involved in the American space exploration effort was focused on the Apollo program, the one that eventually landed humans on the Moon. But there were some that were already envisioning the post-Apollo future, and the hardware needs it would bring with it.

There are probably few people in this world that haven’t heard about the Space Shuttle, or the Space Transportation System (STS), as it was officially known. First flown in 1977, the family of spacecraft stayed in service until 2011, the longest for any human-rated space vehicle design, and when it was retired, it left a huge hole in the American space program, only recently filled by the SpaceX Crew Dragon.

The Space Shuttle, comprising an airplane-looking orbiter launched by means of two solid rocket boosters, entered the history books for a number of firsts, including that of being the only crewed spacecraft with wings to have reached orbit and then land. And it had its share of tragedies, too, over the years.

As you might have thought, the idea of the Space Shuttle didn’t simply pop into the minds of space engineers, but was the result of years of hard work, work that dates back to the days of the Apollo program.

One of the pre-Shuttle designs being studied then (there were several) was called Star Clipper. It was a project born in the minds of people working for Lockheed, and was envisioned, just like the SLS, as an Earth-to-orbit spaceplane.

Unlike the SLS, though, it did not use two solid rocket boosters that fell away once depleted, but a wrap-around fuel tank, which too would be ejected during ascent – but only the tank, not the more expensive pieces of hardware, which could be then reused for subsequent missions.

This stage-and-a-half design, as it was called, was centered around the spaceplane itself. It made use of relatively small wings, as it was envisioned as a lifting-body machine, meaning the thing’s body itself produced enough lift for its immediate needs. Packing three jet engines, capable of developing 1.5 million pounds of thrust, the Star Clipper was supposed to be 186 feet long (57 meters), and featured rotating wings that deployed at subsonic speeds.

The tank, which when attached was like an inverted V, would have perfectly matched the contour of the spaceplane, completely surrounding it, with the exception of the engine side, with an explosive substance. This tank would have been filled with liquid hydrogen, which could also be found, alongside liquid oxygen, in other tanks, fitted inside the fuselage.

When empty, the wrap-around tank would detach, and its shape was supposed to allow it to be carried by airflow up and over the still ascending aircraft.

As more and more ideas flowed in for NASA’s upcoming spaceplane, the Star Clipper didn’t make the cut, but its demise, during development stage, did partially help the SLS be born, especially through the extensive studies made on the advantages of drop tanks.

As it stands, history never recorded an actual flight of the Lockheed Star Clipper, so there is no actual footage of it in action. The design of the spaceplane and its fuel tank would have made it look like an arrowhead shooting for the sky, and that would have been an impressive sight.

Luckily, modern technology does allow us to peek inside worlds that never came to be, and the Star Clipper got its chance at visual Internet stardom late last year, when space technology animation specialist Hazegrayart published a video of it doing its thing. You can enjoy all the action below. 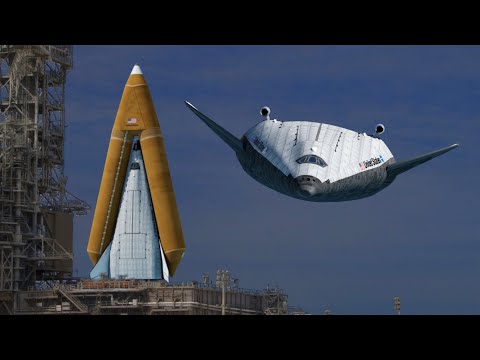