Home > News > Videogames
Cosmin Vasile
There must be a future where Star Citizen is actually a full-fledged game, otherwise, we can’t imagine why so many people would pledge with their wallets to what has become the most expensive project in the history of gaming industry.
6 photos

That being said, parts of Star Citizen are playable and many prefer it over other similar titles like Elite Dangerous and EVE Online. This week, developer Cloud Imperium Games announced the release of the Star Citizen – Alpha 3.17: Fueling Fortunes update.

A major expansion to the game, Fueling Fortunes promises to bring more economic and career opportunities to players in the form of new locations to explore, as well as tools meant to further support emergent gameplay.

Furthermore, the update adds a brand-new ship from the Musashi Industrial & Starflight Concern (MISC) manufacturer, the Hull A, an entry-level spacecraft in the MISC Hull lineup of cargo-hauling vessels aimed at pilots who have just started their career in trading.

The MISC Hull A has been specifically designed to haul lots of cargo. The entry-level ship has the ability to land planet-side even when fully loaded, which makes it the perfect vessel for enterprising station-to-orbit cargo pilots through the universe.

In addition, the Fueling Fortunes update brings a new functionality to NPC vendors and storefronts, allowing pilots to sell unwanted inventory items for UEC when they’re done exploring or pirating. The update also introduces new ways to earn credits with the addition of ship-to-ship refueling, allowing MISC Starfarer owners to refuel ships in space and charge customers for the service.

Fueling Fortunes adds mining gadgets that can further enhance the mineral yield of asteroids. Last but not least, players will now be able to explore the first implementation of river technology with the introduction of the first interactive river on microTech, very rich in plant life and harvestable resources. 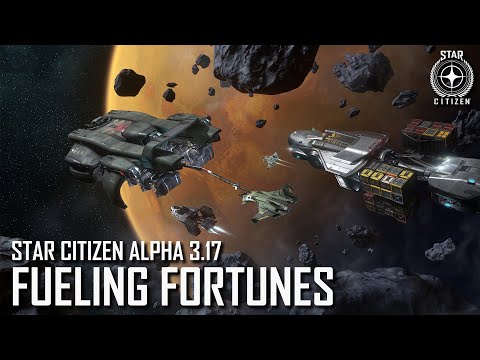