3 Splurge on This $10 Million Waterfront Mansion, Get a Yacht for Free

SS Berta Is a Giant Floating Pumpkin, Because You Don’t Need Boats to Chase Dreams

This is the story of SS Berta, a boat like no other. Since August is Sea Month on autoevolution and, for 30 full days, we’ve looked at some of the biggest, most advanced, most expensive or, in some cases, most luxurious vessels, it’s time we go out on a high note. Yes, it’s possible. That high note also happens to be a hilarious one, but no less impressive because of it.

SS Berta is not a boat, even though it floats. It’s actually a homegrown giant pumpkin that’s been floated down Missouri River over the weekend, in the hope of breaking into the Guinness Book of World Records. The mission of completing a journey in SS Berta longer than 25.5 miles (41 km) has been accomplished, and topped, and it was possible through the sheer will, superb balance skills, and extreme hard work of Duane Hansen.

You could call Hansen the “builder” of SS Berta and you wouldn’t be entirely off mark. Hensen is famous in his Nebraska hometown of Syracuse for his oversize pumpkins, but it wasn’t until more than a decade ago that he came up with the idea of using one as a boat. Then, at a trade event, he met the person holding the now-defeated record of 25.5 miles paddled on the Red River inside a giant pumpkin, and the more he spoke to him, the more he realized he wanted to give it a try.
Hensen spent an entire decade growing the pumpkin that would become SS Berta, so in the end, he got an 848-pound (385-kg) monster of a pumpkin with a diameter of 146 inches (371 cm). He tested its buoyancy by dunking it inside a tank, so he’d know where to cut and carve out the interior, as the video available at News Channel Nebraska shows.

SS Berta was transported to the launch dock on a small trailer, sitting like the queen she is now, on a pillow. Hensen made sure to carve for himself a cupholder on the side, but that’s about as far as creature comforts go with this one. The interior also held a small plastic cooler that doubled as a seat. The paddles and a life vest were part of the standard equipment, but there was no room for them inside the pumpkin-boat.

On August 27, 2022, at sunrise, Hensen and SS Berta sailed off at the Bellevue Public Boat Docks, en route to Nebraska City. The previous record was reached at the 577 mile marker, some six hours into the journey, but Hensen kept paddling to the final destination, which he reached after a grueling 11 hours. Members of his family and city officials tagged along in a boat to document his journey and make sure he got immediate assistance, should something have gone wrong.

If it had, it would have had nothing to do with the engine of the boat – because SS Berta had none, not unless you count Hensen’s two strong arms for propulsion. Upon reaching his destination, he said the biggest challenges along the way were related to maintaining balance. His floating pumpkin would regularly take on water, especially when motorized boats passed by and he was left struggling in the huge wake created by them. Then, he had to tackle rocky shores and sandy strips, and there was also the issue of having to sit down without moving too much for 11 hours straight.

In the end, his incredible adventure was a success, but it’s not one he will think of doing again. Hensen, who celebrated his 60th birthday one day before his record-breaking attempt, admitted he was “physically exhausted” and rather sore in the knees when he was done. From his interviews, it’s clear that the task was more challenging that he’d anticipated, but he completed it the way an experienced sailor would: with determination, a certain dose of recklessness, lots of force, and some teeth-grinding.

To the entire community of supporters, Hensen’s feat is not an ego trip, but proof that you can do anything you set your mind to, as long as you work hard enough and never lose focus. It’s also testimony to Hensen’s strong character, if only for the fact that he grew that pumpkin for a decade so it would become SS Berta and, in the process, help him get in the history books. As a side note, as of the time of press, Guinness is yet to certify the new record.

SS Berta and Hensen are true legends, and their heart-warming story is the perfect note on which to end our Sea Month. Even if this legendary duo will never get to sail the open sea. 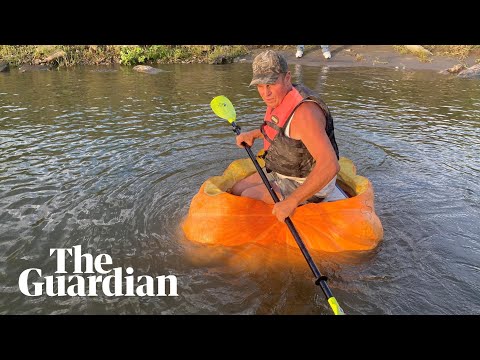