1 Sono Motors Enters a New Production Phase for Its Sion SEV, Is Building a Test Fleet

5 Squad Solar Car Is a Tiny but Solid Urban Mobility Solution
Car video reviews:
Up Next

Described as a solar vehicle designed for sharing and MaaS (mobility as a service), the Squad Solar City Car is not your average four-wheeler, but rather a combination between a moped and a car, offering the ease of operation of the former and the safety and comfort of the latter. It’s affordable, a breeze to drive and park, and ready to assist you in your daily trips.
8 photos

After three years of teasing and development, Netherlands-based company Squad Mobility has finally launched “the world’s first solar city car”, a SEV (solar electric vehicle) with a capacity of two passengers plus some luggage. Squad’s mini four-wheeler is 2 m (6.5 ft) long, 1.2 m (3.9 ft) wide, and has a height of 1.6 m (5.2 ft). It has a storage capacity of 68 liters or 243 liters, with the seat folded. The four-wheeler can be used with the doors removed, if you want to save energy and still get an increased flow. However, air conditioning is also available as an add-on to the vehicle.

Squad’s solar car is considered a light electric vehicle in the European Union, falling in the L6e category, which means you only require a moped license to be able to drive it. While regulations vary from country to country, drivers as young as 14 can get behind the wheel of the Solar City Car.

While safety might not be the first word that comes to mind when it comes to Squad’s tiny urban vehicle, the manufacturer boasts of equipping it with a full roll cage and crash structure in the front and rear.

The SEV packs two 2Kw rear in-wheel motors and four 1.6 kWh batteries, offering a range of up to 62 miles (100 km) on a charge. The Solar City Car can hit a speed of up to 45 kph (28 mph). It has solar panels on the roof that can add 12.4 miles (20 km) of range per day in the summer, it comes with regenerative braking and 220V charging. The batteries are easily swappable and portable.

Squad Mobility’s Solar City Car is now available to pre-order as a private vehicle and it will also be offered as a shared mobility solution via an app. Pricing for the SEV starts at €6,250 (around $6,515) and goes as high as €9,300 ($9,700), if you opt for full doors with windows, air conditioning, and other extra features. 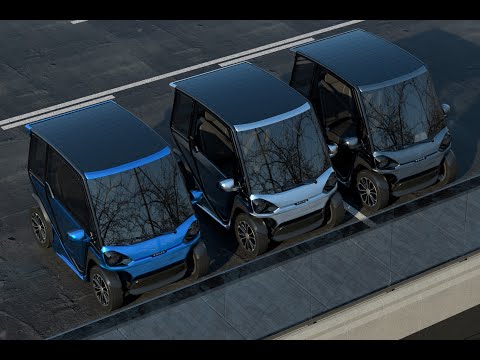