Aurel Niculescu
Fans of the Drive 615 channel on YouTube know very well about host Byron Glover Jr.’s love for everything C8 Chevy Corvette-related. Those who are new to the source, though, will get an enjoyable 2023 Z06 surprise right now.
25 photos

His proximity to General Motors’ Bowling Green Assembly Plant has enabled some cool C8 encounters in the past, and the reviewer has now become a traditional Chevy “stocker.” Efforts did pay off handsomely over the past weekend, and now we have not one but two videos (both embedded below) to prove that.

The first one sees the Youtuber embark on an adventure to deliver an “exclusive look at a 2023 C8 Z06 Chevrolet Corvette in the wild.” Basically, he knew the all-new mid-engine Z06 would show up at the CMA (Country Music Awards) event in Nashville, Tennessee.

And thanks to his “expert” placement (well, he just parked next to it), he was rewarded with the sight of a 2023 C8 Chevrolet Corvette Z06. It’s not just any Z06 though, because the Red Mist (over a natural interior) example is the Convertible version. By the way, with all the timestamps neatly arranged in the description, feel free to jump to the most interesting parts (revs, driving, etc.) if you’re in a hurry.

But do spend a moment with the second feature as well. That’s because the follow-up part of the CMA adventure also brings a possible “world’s first” (outside of GM) comparison between the 2021 C8 Chevy Corvette Z06 and the reviewer’s white 2015 C7 Z06. He basically staked out the rollback tow truck down Broadway and the party district of Nashville, Tennessee.

Then, they went across the Cumberland River to allow us the sight of the city’s skyline lighting up the background as a sort of C8 Z06-dedicated CMA afterparty. Eventually, the truck settled on a small street around the Nissan Stadium, and it was unloaded in preparation for another lift – it was probably on its way to another event appearance.

So, here was the perfect opportunity for a quick and entirely unofficial comparison to the host’s 2015 Arctic White (with Adrenaline Red interior) ‘ Vette. So, which one do you choose: white C7 or the Red Mist C8 Z06? Our bet is on the latter, even though it lacks the cool Z07 package. 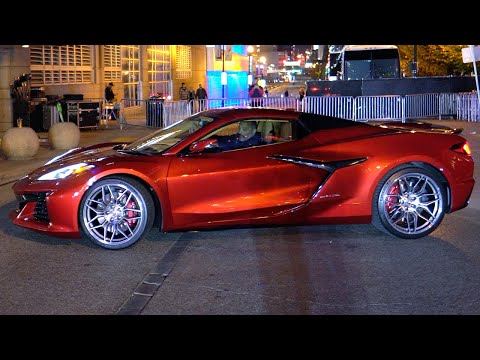 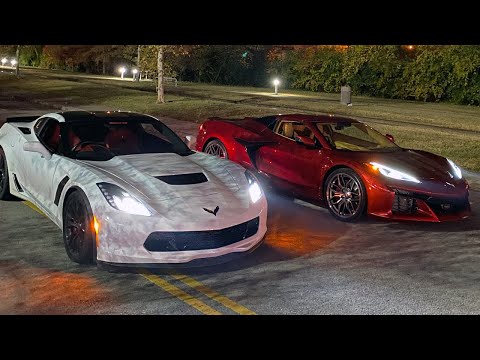