1 This Restored Grumman Mallard Flying Boat is Classier Than a Yacht, More Useful Too

4 Forget a Catamaran, This Amphibious Private Aircraft Could Steal Its Thunder at a Marina

5 Enjoy Adventure Flying With the Amphibious Icon A5 - Comes With Its Own Trailer
Car video reviews:
Up Next

Dubbed the most thrilling and versatile light sport aircraft (LSA) in existence, the ICON A5 looks like a Lamborghini with wings. Even more impressive, it can land or take off almost anywhere and it’s a lot cheaper than a new Aventador.

During the mid-1800s people could only dream about flying but less than half of century later, this dream became reality. Fast forward to the 21st century, and aviation has reached a level of sophistication that probably no one had envisioned back in the days when the Wright brothers made their maiden flight.

These days, flying is a part of daily life for millions - if not billions – of people worldwide and aircraft come in various shapes and sizes. Among them are light sport aircraft (LSA), a relatively new category of small, lightweight aircraft that has given birth to the epic A5.

It all started in 2004 when Kirk Hawkins, an engineer, and F-16 fighter pilot joined forces with fellow Stanford graduate and product designer Steen Strand to form ICON Aircraft, Inc. in Vacaville, California.

The company was founded in response to the Federal Aviation Administration (FAA) establishment of the LSA category in 2004 and its aim was to create the world’s most exciting sports plane.

While this was easier said than done, it only took ICON about two years to build a fully functional prototype that made its first flight in July 2008. A month later, the high-tech amphibious aircraft named A5 was revealed to the public at a private event in Los Angeles, much to everyone’s excitement.

A lengthy testing phase followed, and in July 2014, the production version was shown to the public at the EAA AirVenture Oshkosh Air Show where the company racked up no less than 143 pre-orders.

The amphibious plane received the S-LSA airworthiness certificate from the FAA in June 2015 and since then, it has become one of the most praised light aircraft in the world.

So, what makes it so special?

Built around a carbon fiber airframe, the A5 stands out due to its gorgeous exterior, which was inspired by contemporary sports cars.

Measuring 22 feet (6.4 m) in length and 7.1 feet (2.2 m) in height, it can take up far less space than a conventional light aircraft because it features foldable wings.

Equipped with retractable landing gear, it can take off and land on paved, grass, dirt, and gravel surfaces as well as water. To flourish at sea, it has Dornier-style platforms that provide hydrodynamic stability, house the retracted main landing gear, and also allow passengers to stand on them during docking maneuvers.

When viewed from the outside, you can’t help but doubt that the tiny A5 can comfortably accommodate two passengers and up to 60 pounds (27 kg) of luggage. However, once the bubble-glass canopy is lifted, any form of doubt is eliminated.

Conceived by automotive designers, the 46-inch-wide (114 cm) cabin is surprisingly spacious and ergonomic. With carbon fiber trims mounted on the dashboard, and a center console flanked by two leather-upholstered, waterproof seats, it looks more like the interior of a sports car than that of light aircraft.

Arranged like a sports car’s gauge cluster, the cockpit avionics include an angle-of-attack, altitude, fuel, and fuel level indicator as well as a tachometer and altimeter. As standard, the aircraft is delivered with a removable (and portable) Garmin Aera 796 GPS system integrated into the center stack. For a more infotainment system-like experience, customers can opt for the Garmin G3X Touch flight display that offers 3D views of terrains, airport diagrams, and weather information.

The A5 is powered by Rotax 912 iS. A compact horizontally-opposed, four-cylinder, the naturally aspirated and fuel-injected unit can deliver 100 hp. If we compare it to a sports car’s engine, it doesn’t seem like much but for an LSA, it’s more than enough. Able to gobble up 100LL aviation fuel as well as 91 Octane gasoline, the engine helps the amphibious plane fly at a maximum speed of 95 knots (109 mph or 176 kph).

In terms of safety, the aircraft has integrated headlights with daytime running lights, a propeller guard, and a parachute that lands the plane in case of emergency and can be optionally fitted.

Speaking of which, the list of options also includes a towable mobile hangar and an inflatable dock that can be attached to a larger boat or yacht.

You would think that this amphibious bundle of awesomeness demands a seven-figure sum but in reality, it’s not that expensive. Prices begin at around $270.000 and can reach close to $400.000 for a fully-equipped model.

Extremely maneuverable and easy to fly, ICON’s celebrated plane requires a sports pilot license, so you don't need a full private pilot license to fly it. Moreover, the company offers a comprehensive training program at one of their flight centers in Vacaville, California or Tampa, Florida.

If you’re ecstatic about the idea of flying the A5 but you don’t have the money to buy one, you can still experience it in a virtual environment thanks to its inclusion in recent versions of Microsoft’s Flight Simulator. 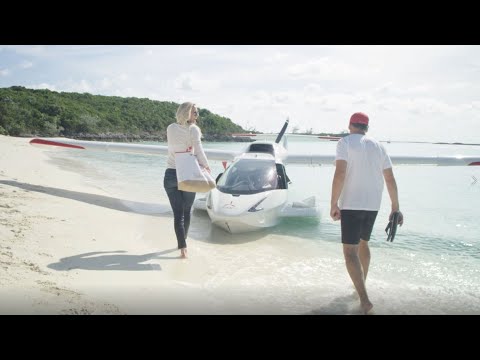