The American car industry is renowned for its love affair with the V8 engine, but it's not alone. Despite sitting almost at the other end of the world, Australians seem to share the same affinity for engines with two banks of four cylinders joined together at the bottom.
7 photos

However, even they realized the Holden Commodore VL Turbo was something special, despite the fact that it only had six cylinders, all lined up one after the other. Featuring a 3.0-liter displacement, the straight-six was actually borrowed from Nissan when the switch to unleaded 91 octane gasoline was made. Adapting the old engine already in use in the model wasn't feasible anymore.

Straight-six, Nissan, turbocharger—this has a definite Skyline GT-R vibe about it. Well, the RB30ET didn't receive that kind of honor, being a variation one could only find in Holden's model. However, non-turbocharged versions of this unit did power the R31 Nissan Skyline GTS1 and GTS2, back when the Skyline name didn't bear the same weight it does now.

With a weight of 2,760 lbs (1,250 kg) and a power output of 201 hp, the Holden Commodore VL Turbo was actually quicker than its V8 counterpart, and that's before you even consider how easily tuned these Japanese engines are. Many people did consider that, which is why seeing these cars with over three times the stock power isn't exactly an event.

The thing with getting more power is that it also comes with greater responsibility attached, and not everyone is equipped to deal with that, even if they might not realize it. Case in point, the driver of this Commodore VL captured on the dashcam of what looks to be a Honda Civic Type R (you see, not only Teslas can have "Sentry Mode").

According to the video description, the driver had just come out of a performance shop, which suggests he might not have adjusted fully to the new power output of his vehicle. Obviously, knowing that, you wouldn't instantly attempt a monster burnout on a narrow street lined with cars on either side. Then again, you're not this guy.

Anyone who's watched clips from cars & coffee-type events is used to the sight of an out-of-control Mustang going sideways, slamming into parked cars. What makes this clip special is just how quickly and nonchalantly the driver makes his getaway. Not only that, but he even does a milder burnout on his way out.

Sadly for the Ken Block wannabe, what he didn't realize (or at least not until he got out of the car) was that his front license plate had fallen off following the crash, leaving the most obvious of breadcrumbs for anyone looking to find him. And with a severely damaged Honda Civic Type R, you can bet your last cent the owner was very much interested in making him pay. 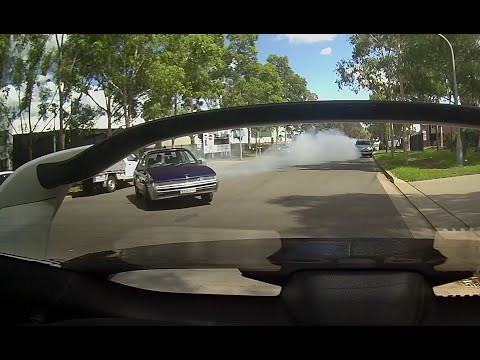