3 NASA Drops the Orion Capsule Into the Water, Watches It Go

4 Artificial Intelligence Is Guiding Human Return to the Moon

Car Chip Shortage to Improve This Year, Won’t Come to an End Too Soon

SpaceX Will Land Americans on the Moon Again, With NASA’s Artemis

Elena Gorgan
NASA has announced the company that will help land Americans on the surface of the Moon again, and then, hopefully, farther off on other planets and on Mars: SpaceX.
1 photo
For the past year, NASA has been working with three partners as part of the Artemis program, which will put man (and woman) on the lunar surface again: Blue Origin, Dynetics, and SpaceX. SpaceX has been awarded the $2.89 billion contract to build the lunar lander, which, NASA explains, will be based on Starship.

Starship is SpaceX’s reusable rocket, which, CEO Elon Musk hopes, will also take man to Mars and eventually lead to the Red Planet’s colonization. NASA is showing faith in the reusable rocket as well, picking it for the Artemis mission as the lunar lander. In this capacity, it will put the first woman and the first person of color on the Moon by 2025.

“This is an exciting time for NASA and especially the Artemis team,” Lisa Watson-Morgan, program manager for HLS at NASA’s Marshall Space Flight Center in Huntsville, Alabama, says in a statement. “During the Apollo program, we proved that it is possible to do the seemingly impossible: land humans on the Moon. By taking a collaborative approach in working with industry while leveraging NASA’s proven technical expertise and capabilities, we will return American astronauts to the Moon’s surface once again, this time to explore new areas for longer periods of time.”

The phrase “sustainable lunar exploration” is also included in the press release, which gives a hint as to the edge Starship had over rival proposals. SpaceX’s main focus is on developing reusable rockets, which can land on their own vertically, thus enabling considerably lower mission costs and higher mission frequencies.

The video below offers a bit more details into what NASA is hoping to achieve with the lunar landing. 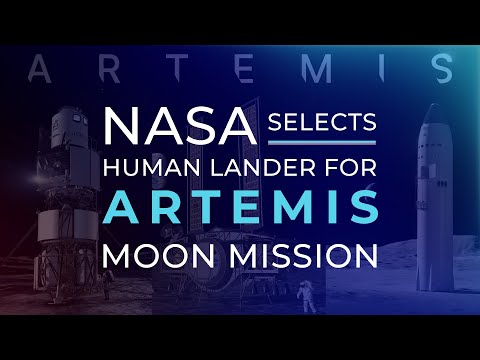 NASA has selected Starship to land the first astronauts on the lunar surface since the Apollo program! We are humbled to help @NASAArtemis usher in a new era of human space exploration ? https://t.co/Qcuop33Ryz pic.twitter.com/GN9Tcfqlfp