1 Advanced Gemini: The Little Known Spacecraft Concept That Could Have Outshined Apollo

2 This NASA Spacecraft Could Have Put Americans on the Moon in 2018, But Congress Stepped In

4 So How Did Our Solar System Form? NASA's Lucy Spacecraft Is on Its Way to Find Out

5 Connectivity in Space: the Moon Will Soon Have Its Own Internet
Car video reviews:
Coverstory

Although the contributions the European Space Agency (ESA) is making to global space exploration efforts cannot be ignored, it sometimes feels the Europeans are falling behind all the wonderful things American NASA and local space companies achieve – look, for instance, at the many pieces of hardware, including (or especially) reusable ones, the U.S. uses during our time to advance its goals.

For years, ESA seems to have somewhat been trailing behind government-backed NASA, or even privately-funded SpaceX, technologically speaking. The agency seems happy to be taken along for whatever ride takes place, and happy to chew any bone the bigger and richer American cousin throws at it. But that’s how most of Americans perceive the agency, as ESA has its own, very diverse roster of projects in the works, and might very well one day challenge the American supremacy.

One of these projects is called Space Rider, and even if that’s name that brings up flashes of 1980s TV shows (cartoons, even), it’s actually one of the most ambitious projects the ESA is currently running, and one that could put the word “reusable” on the table for the nations of the Old Continent as well.

Now, don’t go thinking this is a rocket or some kind of booster. It is, in fact, a reusable spacecraft, in a sense not unlike the space shuttle, but not meant to carry humans into space. It is meant to allow those companies who wish to conduct experiments in space to do so, without having to pay premium for using the disposable capsules available, or without having to look for an open slot on the crowded International Space Station (ISS).

ESA describes the Space Rider as being an uncrewed robotic laboratory. It doesn’t look as fancy as its name would have you believe, as it’s nothing more than a shell packed with hardware and capable of holding up to 800 kg (1,763 pounds) of cargo, fitted in a 1,200 liters of cargo bay space.

All in all, the thing is the size of two minivans put together, and comes equipped with 600 watts of power, but also with thermal, control, data-handling and telemetry capability.

The goal of the Space Rider is to “provide Europe with an affordable, independent, reusable end-to-end integrated space transportation system for routine access and return from low orbit,” in the agency's own words. It will take off propped on top of a Vega-C rocket, and reach whatever orbit altitudes and inclinations the clients flying cargo on it need it to reach.

Once in orbit, the laboratory will spend about two months up there, doing it’s thing as host for experiments in various fields. We're told the ship was meant to accommodate experiments in pharmaceutics, biomedicine, biology, physical science, and even surveillance. A wide array of experiments is expected to be suitable for this platform as it features a multi-purpose cargo bay which is standardized, but comes with customizable interfaces that can be adapted to various customers' needs.

Once its job in space is done, the laboratory will head back down to Earth, payloads safely tucked away inside, to do a parachute-assisted landing on a runway that's yet to be chosen - at the time of writing, the ESA says it’s eyeing the Azores archipelago as a landing base.

After it’s been unloaded, the ship can enter a refurbishment process to get it ready for its next mission. Hence, reusable, with the Europeans saying a single Space Rider can be sent into orbit for repeated missions up to six times.

Officially described as a lifting body, the Space Rider is expected to have its first flight in 2023 (some sources claim it will be 2024, given the unpleasant events taking place in Europe). If successful, word is lessons learned with this thing and its mission will be used by ESA to develop future projects. We’ll discuss several of them in the coming months here on autoevolution. 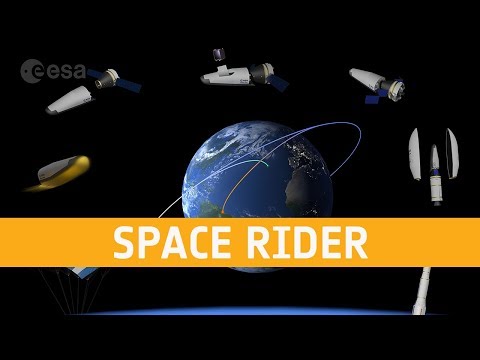