1 Kimi Triumphant at Spa
Car video reviews:
Up Next 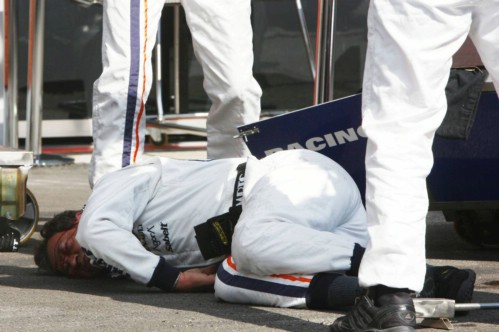 A very unfortunate incident occured in the GP2 series at Spa-Fracorchamps this weekend. A Trident team mechanic was hit by a wheel gun on the head and was sent to the hospital by helicopter.

The incident occurred on Saturday, when 57-year-old Vasco Rossi from the Trident team was in the wrong place at the wrong time. A car driving down the pit lane caught the cable of a wheel gun and sent it flying, stricking the unlucky mechanic on the head.

The mechanic was sent to the hospital where he remains in an induced coma for further investigations for three days. The spokesperson for GP2 series told the Associated Press the mechanic is not in a life-threatening position.

Spa was the venue of another ill-fated incident and again from the GP2 series. Stefano Coletti crashed his car in the Eau Rouge. The 20-year-old Monegasque started the race for the pit lanes and drove surprisingly well at only his second race in GP2 series.

The Durango team driver pushed hard to achieve the eight place and thus his first points in the series, but lost control and seriously crashed in the protection tires. Although at first it was speculated he suffered foot and back injuries, it was later announced by his team he had only sustained heavy bruising.

The Monegasque was also taken to hospital by helicopter and again GP2's spokesperson revealed he is only suffering from shock.