2 Tetanus Cord Proves Custom Work Is Art, Without a Doubt

3 Blast from the Past: That Time Lexus Put Ice Wheels on the NX to Show Off

5 Medieval One Is the Insane Helmet-Shaped Hot Rod Built From Scratch
Car video reviews:
Up Next

1970 Ford F-100 With Crown Victoria Frame Is “Built Not Bought,” Yet Not Perfect

If it’s too loud for you, you’re too old. Rafael Capone, a car customizer and sound engineer from Atlanta, Georgia, is the proud owner of the world’s loudest Hummer, which he’s dubbed Soul Asylum H2.

Soul Asylum H2 Is the Loudest Hummer in the World, a Rolling Soundstage

The name is not the most original, since this is a 2005 Hummer H2, heavily modified to serve as an advertising board (but with light and sound) for Capone’s Atlanta-based recording studio, Soul Asylum. At a glance, it might not be the most original or interesting approach to car customization, but the amount of work and effort Capone put into the project, as well as the outstanding results, make it worthy of all the attention it’s getting.

Rafael Capone has always been into car mods and customization, and has an experience that goes all the way back to the ‘90s. At the same time, he’s also been into music all this time and, after attending one car show and seeing there a truck fitted with several speakers, he started toying with the idea of building one such car himself.
First off, he purchased a Hummer H2 second-hand, for some $40,000. The choice of the make was an easy one, because Capone wanted to go down the “go big or go home” route. He also believed the Hummer was the only vehicle big enough to make for an actual, rolling soundstage.

It took him over one year of working with custom shop Traffic Jams Motorsports to get the H2 as it is today. It’s a multiple champion (it has Mobile Electronics Competition Association World Champion SQL titles, and several MECA SQL state champion titles), has appeared in countless music videos and even more events, has partied with celebrities and is still being used for the advertising purpose it was initially designed for.

The H2 is now packed with 86 speakers in total, 11 amps, eight subwoofers, 34 mid-range speakers, 28 tweeters, and 16 horns, with a studio-grade mixer blending it all together, and three alternators and seven batteries keeping everything online. Tests conducted by Capone have shown that the H2 is able to produce sound as deafening as 151 decibels and that it’s heard 3 miles (4.8 km) away. This thing is an entire concert packed inside a car, rolling on four wheels.

And that was the goal of the project from the start: not making a loud car, but delivering studio-quality sound on the road.

“We want sound quality at loud natural volumes, versus just blaring, hurt-your-ears-loud,” Rafael explains in the video at the bottom of the page. “I wanted it to be loud but I wanted sound quality. I wanted to hear what I hear in the studio on the road.”

However, the Soul Asylum H2 isn’t just a car attacked by speakers from all sides: Capone says that not a single piece on it has been left factory original, from the engine to the added LEDs that really make the part lit. For a completely immersive experience, the H2 has a motorized lifting top hat that is equally packed with gear.

Inside, there’s fiber-optic illuminated headliner, a full PA system with microphones, and a custom wheel made of stone with LEDs inside, several screens and an iPad that controls everything. The ride sits tall on 28-inch (71-cm) Diablo wheels, and it comes with a wide body kit, custom grills and custom red wrap.

Speaking of value, Capone won’t put a number on how much money he invested in the project, because that’s not the gentlemanly thing to do. However, if he ever was to sell it, he knows exactly how much he’d ask for it.

“A great businessman will tell you everything is for sale,” he says. “Without hesitation it will be a quarter million dollars.” 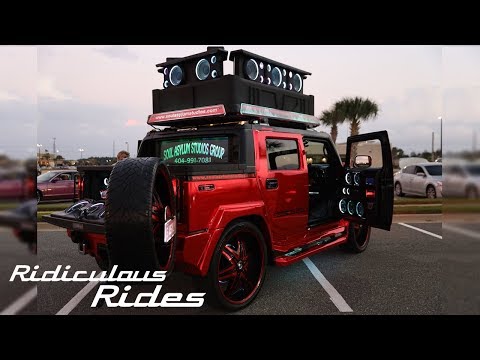