2 Toyota GR Yaris: Designed From the Ground up to Be a Pocket Performance Machine

5 2017 Toyota Yaris WRC Revealed, Will Race Next Year With Microsoft As A Sponsor
Car video reviews:
Up Next

Rallying is not as expensive as Formula 1, but it still is an incredibly costly sport. While fans wish they could own a WRC car, not even the homologation specials are close to the level of performance offered by the current crop of racing cars. But what if you could build a replica?
6 photos

Well, a group of Spanish rally enthusiasts has done just that. As you can imagine, the result is a bit off what Toyota can build, but it is understandable. First, their 2022 Yaris Rally1 WRC replica was based on another WRC Yaris replica, which was also built by them.

Last year, they made a replica of the WRC Yaris just for giggles and made a Gymkhana-style video on private property just for fun. This year, the Spaniards at Passats de Canto have decided to turn things up to 11 and try to build a replica of the yet-to-be-revealed 2022 Yaris Rally1 WRC.

Just like last year, they based their replica on a 2002 Hyundai Getz, which we presume they already owned. As you will observe in the second half of the video, the Hyundai went through a lot to “become” a Toyota Yaris WRC replica. It also shows a great level of skill in decorating a vehicle with colored tape, and that does not even begin to mention the home-brewed wide-body kit.

Unlike other replicas, this one is driven hard, as its creators do not care that much about it. We advise against driving a 20-year-old vehicle this hard, but we cannot help but notice that the unnamed and carefully concealed driver knows what he is doing.

Regardless, driving a conventional vehicle this fast may lead to a rollover, and one of those could be a tricky situation in an older car.

It may also be an issue in a newer model, but if the hatchback you are driving is 20 years old, you can be sure it is not the safest vehicle on that road, even if the road is closed. Without further ado, enjoy the video embedded below, it really is a holiday treat. 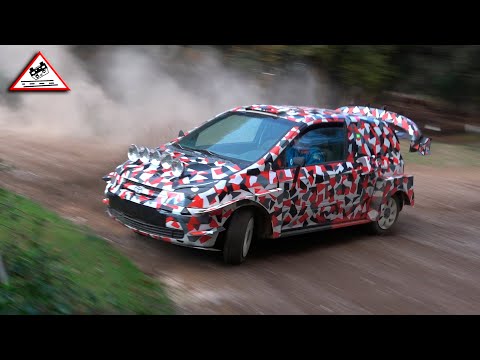