3 DIYer Converts a 1965 Beetle Into a Teardrop Trailer, Makes for One Snuggly Camper

5 $2,500 Tiny Wagon Serves as a Cozy Camper for This Free-Spirited Woman and Her Pet Goat
Car video reviews:
Coverstory

Searching the world for capable machines designed to bring back the notion of freedom, I've discovered a team that's been active in the industry since 1952. Believe it or not, I'm referring to Jurgens, a caravan and travel trailer builder with roots steeped in South Africa.

Someday, Our Patience Will Be Rewarded With a Fresh Version of the TuffTrax Travel Trailer

Folks, nowadays, the name Jurgens is whispered only between connoisseurs of off-grid and off-road habitats; I had never heard of the team until just a few days ago. Now that I have, I'd like to bring to your attention a team that creates trailers capable of quite the abuse.

If the name Jurgens is new to you too, let me point out that since their first days of business in 1952, they've managed to sell over 100,000 travel trailer units, according to their website. Even though this manufacturer initially saw its beginnings in South Africa, nowadays, they're known for designing, building, and selling habitats out of Australia.

Now I could go on and on about why you should consider this crew for your next travel trailer purchase, but I'll let you draw your own conclusions from the gallery, text, and the video below.

Folks, you've seen camping trailers before here on autoevolution. However, TuffTrax is different in that it receives a tad more attention than your average off-road unit. For example, the habitat is set up on a galvanized chassis and features a Cruisemaster XT trailing arm suspension explicitly designed for off-road use. Two shock absorbers per wheel are also standard. 16 in rims, off-road tires, and diamond plate skinning on the lower half ensure minimal worries as you blast through untouched territory.

To help protect the shell even further, skid bars are part of the base package. Rarely have I seen manufacturers add something like this to your standard package. You'll see these bars exposed all around the camper and even acting as steps to help you inside your home. More skid protection is also offered at the rear if you've miscalculated that departure angle.

Now that the base has gotten the attention it deserves, time to see what sort of home you'll have at your fingertips. The shell is completed using composites with an outer skin from aluminum. 20 mm (0.78 in) high-density foam is added for insulation. Need I mention that these walls are DuraTherm, a brand found in industrial parks, vans, freighters, and if I'm not mistaken, even bunkers.

The roof is a one-piece fiberglass top, and the floor is also composite. For the base, Integra is the brand chosen and comes in with 40 mm (1.57 in) of insulation and aluminum outer skin to help protect against possible damage. Reinforcing brackets are in place to strengthen the connection between the walls and flooring.

If there's one thing I've learned about a camper that comes out of Australia, it's that they pack as much as possible into as little space as possible. The exterior is tattered with drawers, storage lockers, jerrycan holders, spare tire mounts, and the galley is outside and set up on a slideout. The inclusion of an external shower and porta potty storage and TuffTrax is looking pretty decked out.

On the other hand, the interior is actually quite simple, and that's a good thing as it opens up the living space for just that, living. Sure, you'll find things like a control panel, fridge, double bed, and a modular dinette, and frankly, what more do you want? Storage options? Just take a look at what's available. I nearly forgot to mention that the roof lifts to have you stretching your legs to the fullest.

So, how much is this puppy going to run you? Well, a few things need to be considered, and the first is that this travel trailer is out of stock. But it's out of stock because Jurgens is currently relocating their facilities after a dispute with a former landlord, so be patient.

Luckily, a few units are still floating around dealerships, but you'll probably have to pitch the dog a bone too. Since the last version of TuffTrax, the 2019 unit, was selling for an MSRP of 54,990 AUD, or 40,830 USD (at current exchange rates), the hounds can have their treats, no problem. It's something to consider if you're looking for a travel trailer that looks like it can. 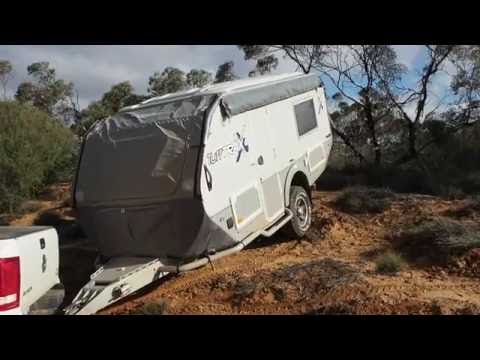