Solar-Powered Aptera Might Be Small but, by Jove, It Will Be Practical

The Aptera is a three-wheel solar electric vehicle (sEV) expected to go into production later this year with a yet-unannounced delivery date. It is currently on its second attempt to reach mass production, with the difference that, this time, things are progressing smoothly.
9 photos

Last weekend, an Aptera Alpha was out at the drag strip outside San Diego to perform moose tests, hard braking and hard acceleration, and stability tests. On that same occasion, CEO Chris Anthony invited Nikki Gordon-Bloomfield of Transport Evolved for a first test drive. Nikki is a reservation holder, but she was there in a professional capacity.

The result is that we get the first proper look inside the tiny sEV that is not computer-generated. On Twitter, Aptera reveals another interesting tidbit about the interior, which may be small, but it will definitely be practical: it will have at least two cup holders, with room for the handle, too.

During Nikki’s short ride in the three-motor early Alpha, she experienced the quick acceleration of the vehicle, which is to be expected with any current-generation electric vehicle, as she remarks herself. Anthony noted that the interior was not yet final, saying that the production version seats would be lower and more comfortable but still lightweight. There’s a rearview camera in there, and a large display that wasn’t there during the ride, having been removed for the tests. Otherwise, the feel of the cabin is minimalist yet practical.

So far, Aptera Motors is living up to promises made earlier this year. When the sEV comes to market, it will boast a 1,000+-mile (1,609+-km) range on a single charge, from a battery topped with solar power in territories with optimal sun exposure. Aptera will offer several battery options, AWD and FWD options, as well as other customizations. The sEV is ideal for couples, offering seating for two and cargo space. 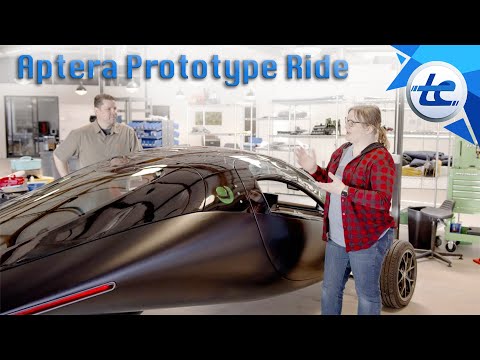 One of our most frequently asked questions is: Will the #Aptera have cupholders?

The answer is yes. Each of our vehicles will come fully-equipped with a place to hold your beverage of choice. Cheers! pic.twitter.com/JOmmfMlh9D

Editor's note: The gallery includes photos of the same Aptera Alpha in Noir, testing at the drag strip outside San Diego, CA.