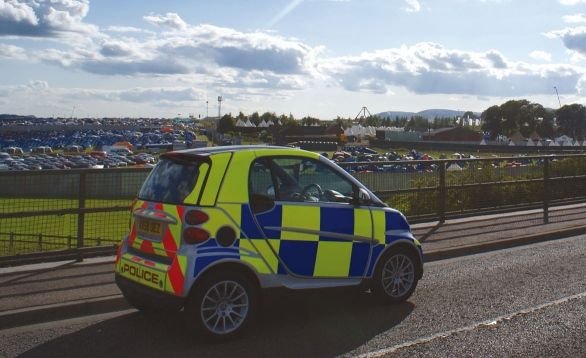 Advertising your vehicles with the help of local law enforcement agencies seems to have become a trend for automotive manufacturers. If the cars they build aren't police, carmakers still seem to find ways and get an officer behind the wheel of their vehicles, as was the case with today's Kia Soul.

Now, smart steps in and begins to wear the checkered blue and yellow body paint seen on UK's police vehicles. Mercedes Benz provided a smart fortwo demonstrator for the Tayside Police to be used by officers as they went about their business at this year's T in the Park festival.

As you might have guessed, this was a publicity stunt. The stunt worked and as a result, smart will begin trials with other Scottish police forces: Lothian & Borders, Strathclyde, Fife and Central Scotland constabularies. "Why?" you might ask.

"The fuel consumption and carbon footprint of vehicles is now high on the agenda of every police force in the country," Graham Strachan, Tayside Police's Fleet Manager said at the event. "smart's reputation for economy and low emissions is well-known so it was perfect for us to evaluate it at T in the Park."

"The smart has gained an almost iconic status and the vehicles are highly visible. With its police livery, the car became even more of a focal point and an excellent means of maintaining our presence throughout the festival," he added.

To get an idea about what got the UK police so thrilled, the smart has an automatic stop-start function, allowing it to provide savings of up to 24 per cent over their predecessors and a CO2 rating of 103g/km.

"In today's economic climate, smart's low running costs are attracting more interest than ever before from private customers and business users. The recently launched smart fortwo cdi also has massive appeal, thanks to its offering of 85.6 miles per gallon (combined) and the lowest CO2 emissions of any current production car at just 88g/km," Iain Macpherson, Mercedes-Benz UK's Corporate Development Manager stated.