Remember the Mercedes-Benz SLS AMG with a Supersprint exhaust system that was dangerously close to punch some eardrums in an underground parking lot?
1 photo
Well, it seems that it sounds like artillery fire on the street as well, as the short video bellow is trying to prove us.

Also filmed by car spotter and YouTube user Totalrevs Supercars somewhere in London, the low-slung AMG supercar is seen strolling around and casually scaring pedestrians and bicyclists with its “Run, it's coming!” exhaust system.

The way in which its owner subtly changed its exterior looks isn't too shameful either, as the white body goes pretty good with the matte black wheels and pretty much every bit on the car that used to be chromed.

We have no idea if the fabulous M159 engine under that ginormous hood has received any modifications as well, but, considering that the slowest SLS AMG already packs 571 hp, it's not like it needs much more anyway. 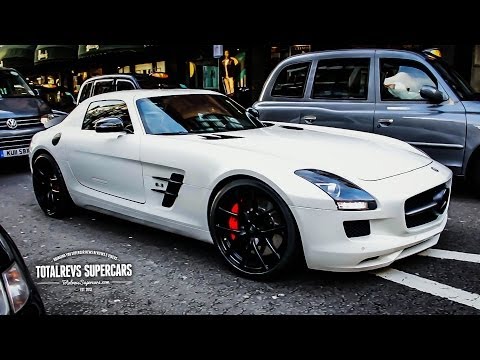